Literature / Legacy of the Drow Series 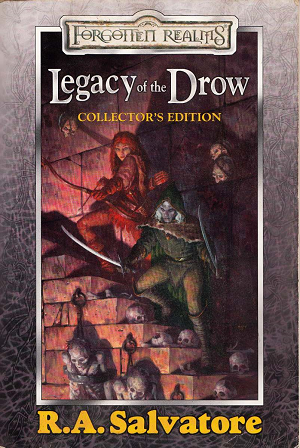 "No race in all the Realms better understands the word vengeance than the drow. Vengeance is their dessert at their daily table, the sweetness they taste upon their smirking lips as though it was the ultimate delicious pleasure. And so hungering did the drow come for me."
— Drizzt Do'Urden, Starless Night
Advertisement:

The Legacy Of The Drow series is the third series of books set in the Forgotten Realms world of Toril, written by R.A. Salvatore. As the title suggests, it features a drow (dark elf). His name is Drizzt Do'Urden and the story of him and his friends has previously been told in The Dark Elf Trilogy and The Icewind Dale Trilogy.

The first book picks up right where The Icewind Dale Trilogy ended, with Regis showing up for the wedding of Wulfgar and Catti-Brie. But some bad shit's about to go down, since Drizzt has some enemies who haven't forgotten about him and are willing to pursue him all the way to Mithral Hall: his sister Vierna, his old nemesis Artemis Entreri, and the mercenary Jarlaxle (who has been hired by Vierna, along with his band of mercenaries). His friends are there to defend him and save him from capture and a Fate Worse than Death, but when it's finally over the heroes have paid a terrible price.

In the second book, Drizzt feels that his very presence is putting his friends in danger of future attacks, and decides that he should turn himself in to the drow of Menzoberranzan so that they will be safe. Catti-Brie discovers his plan after he's long gone, and sets off after him. In Menzoberranzan, Drizzt learns that the drow are planning to attack Mithral Hall whether he is there or not...

In the third book, The Time of Troubles has arrived, and magic has ceased to work properly. This causes all sorts of chaos in Menzoberranzan, delaying the planned invasion of Mithral Hall...but eventually things return to normal, at which point the dwarves of Mithral Hall and their allies must turn back the numerically superior drow armies.

In the fourth and final book of the series, Drizzt and Catti-Brie have been sailing the seas with the pirate-hunter Captain Deudermont and doing what they can to make the world safer for honest folk. However, the demon Errtu (whom Drizzt fought and banished to the Abyss in The Crystal Shard) contacts Drizzt and lets him know that he, Errtu, has the soul of somebody Drizzt cares about in his possession, and that he will continue to torment his hostage until Drizzt releases him from his banishment. Worse, when Errtu finally does return to the world of mortals, he acquires Crenshinibon, The Crystal Shard, which makes him more powerful than ever.

Chronologically preceded by The Icewind Dale Trilogy and followed by Paths of Darkness. Elaine Cunningham's Starlight and Shadows trilogy picks up after Siege of Darkness.