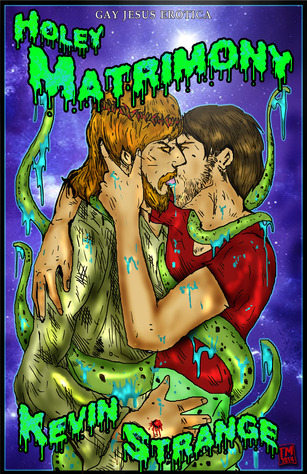 "In sickness and in health, till death do you meet."
Advertisement:

John Schmitt is a deeply closeted man, hiding his true feelings of lust from his wife's father for more than a decade. One fateful evening when John's car takes a plunge off the side of a bridge, John comes face to face with a man even more handsome and sultry than the object of his fancy: Jesus Christ. But as the two men make passionate love above John's dying body on their way toward the light of heaven, John reveals an appalling secret to the savior of all mankind. Will Jesus accept John's peculiar secret? Or will the son of God's own secret prove even more shocking than the one hiding inside John's pants?

Holey Matrimony was published exclusively on Amazon Kindle. (We do not provide a direct link due to the NSFW nature of the story.)