Literature / The Girl in 6E 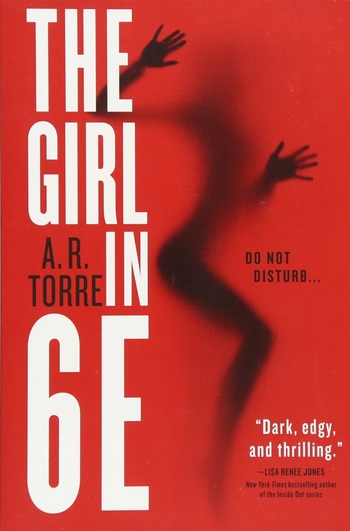 "Jessica. Not my real name. He thinks he knows me. They all think they know me. After all, they've seen my Facebook page, seen the Photoshopped photos that construct my manufactured life. They believe what they see, because they want to believe. They want to believe that I am normal. And for the brief moments I am with them, I fool myself into thinking the same thing."
— Prologue
Advertisement:

Deanna Madden faces a constant dilemma: She doesn't want people to die; but she does want to kill. So far the former desire has prevailed, which is why she has spent the past three years locked in apartment 6E — which she never leaves. Not for food, not for socializing, not even for the fire alarm. She has everything delivered, and has the UPS man — always the same one — sign for the packages for her, so that she doesn't come in contact with a human in order to retrieve them. She doesn't trust herself even for that long.

How does she maintain this expensive existence? Full-time, professional sex camming. To her clients she is JessReilly19, a bubbly college student. It's sordid, but it rakes in the dough and keeps the homicidal ideation at bay; and it's far from boring.

Deanna uses an alias partly to avoid pity: Her mother killed her entire family, then committed suicide. She blames her own thirst for blood on her mother's genes — after all, she inherited all of her physical characteristics; why not her psychological ones? Her shrink thinks her fantasies are only fantasies; what he doesn't know is that Deanna has already killed a person. And every second, she wants more.

But her well-ordered life is suddenly complicated by a client she suspects is up to no good. Seeing that this could be an opportunity to sate her desires and save a life in one stroke, she leaves apartment 6E for the first time in three years...

The Girl in 6E contains examples of: