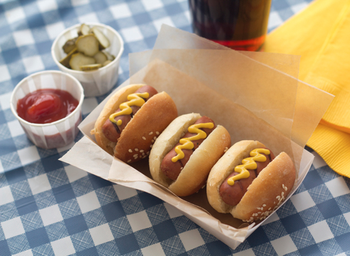 On the bright side, those buns are proportionate.
"What a fuss over such a little thing!"
— Nurse,note referring to a male finicky patient refusing to be helped during disrobing, Carry On Nurse

Because it's considered that Bigger Is Better in Bed, those men that have smaller genitalia are considered Acceptable Hard Luck Targets. This is almost always Played for Laughs, since Naked People Are Funny.

Compensating for Something is the related trope where an afflicted man owns a very large car (or boat, or fountain, etc.) so that he's got something large to show off.

It is one of the few body image tropes that is Always Male.

Possibly one of the reasons that Male Frontal Nudity is not common, since Most Writers Are Male. This is mostly a Take Our Word for It trope. Can be a part of a Humiliation Conga or Shameful Strip. "It's cold in here!" may be invoked as a (Truth in Television) defense.

Subtrope of Appearance Angst. Inverse of Gag Penis. Contrast Bigger Is Better in Bed and Big Prick, Big Problems. A-Cup Angst could be considered a Distaff Counterpart of sorts.

Not From Where I'm Standing

Jake is left cuffed naked for his coworkers to find, who take the chance to mock about his size.

Not From Where I'm Standing

Jake is left cuffed naked for his coworkers to find, who take the chance to mock about his size.