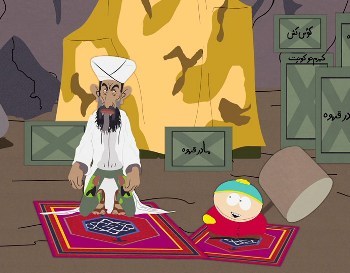 Osama Bin Laden Has Farty Pants is the ninth episode of the fifth season of South Park and was the first to air after the September 11, 2001 terrorist attacks. The plot revolves around the boys receiving a goat by mail from a group of Afghan children whom they donated a dollar to for charity. They decide to send the animal back to Afghanistan, but they all get accidentally locked inside the plane and are flown to the country themselves. There they meet Osama bin Laden...

Despite getting shot and blown up here, Bin Laden would reappear alive and well in later episodes such as "Krazy Kripples", "Cartoon Wars" and "It's a Jersey Thing".