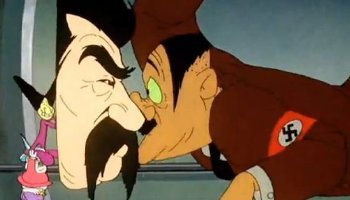 When the German Luftwaffe faces difficulties in reaching Russia, and reports of Gremlins being responsible start popping up, Adolf Hitler takes it upon himself to bomb Moscow. While enroute, his plane is steadily beset by and slowly disassembled by a group of Russian "Gremlins from the Kremlin" (mostly caricatures of the animators), singing a merry tune while at work. When the Fuhrer finally discovers them, the Gremlins outwit him and succeed in bringing down both him and the plane.