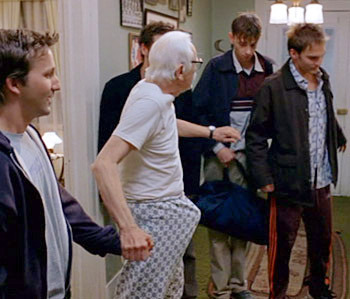 Goddamn Viagra. Don't act like you're not impressed.
"If men could control their dicks, do you think we would wake up every morning hard? Do you think I wanna deal with that in the morning? No, I just wanna get some coffee, read the newspaper."
— Franklyn Ajaye
Advertisement:

Common causes of an unwanted or unexpected erection prevalent in fiction include:

Most of the time this is Played for Laughs and doesn't last longer than a few minutes. However, the condition known as priapism (prolonged erection) is dangerous, and can lead to penile amputation. That's why Viagra commercials tell you to "seek immediate medical attention if an erection lasts for more than four hours." In case you're wondering when a guy is in a state of sexual arousal for several hours, an erection naturally comes and goes a few times, as if it needs a break.

Just as a point of note, men have erections from the time they are infants. In fact, a male has his first erection inside the womb. Unfortunately, since Most Fanfic Writers Are Female, it's not an uncommon trope for a male character just on the cusp of puberty to be "shocked" that his penis has suddenly become rigid. This would not shock any male. What shocks males is that it's now happening so often and at the wrong time. Of course, actual penile ejaculation doesn't occur until within the first year of puberty, so young boys being "shocked" about nocturnal emission isn't so far outside the realm of probability.

Contrast The Loins Sleep Tonight. See also Something Else Also Rises and Bigger Is Better in Bed. Compare Or Are You Just Happy to See Me?, which has more erotic undertones than this trope. May be caused by a Potty Emergency, or vice versa. May result in a "Not If They Enjoyed It" Rationalization, which itself leads to Double Standard: Rape, Female on Male or Double Standard: Rape, Male on Male, or simply jump to the latter without going through the former (which itself may or may not be implied). Jizzed in My Pants is this trope taken to eleven.

Danny tends to get these a lot.

Danny tends to get these a lot.