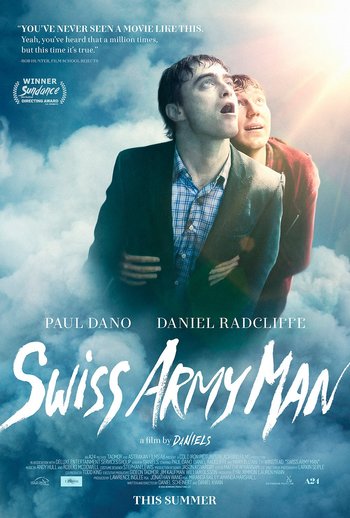 Swiss Army Man is a 2016 dark comedy-drama film starring Paul Dano and Daniel Radcliffe. It was written and directed by the filmmaking duo of Dan Kwan and Daniel Schienert (colloquially known as DANIELS), best known for having directed the music video for "Turn Down For What."

They would later direct the 2022 film Everything Everywhere All at Once.

Stranded on an island and bored out of his mind, Hank (Dano) prepares to hang himself until he sees the body of a young man (Radcliffe) wash up on the shore. Not only is the man not quite as dead as he seems, but he appears to have unusual abilities, such as jet-propelling farts, an erection that can be used as a compass and many, many others. Hank names the corpse Manny, and with his help, Hank may have found not only his key to survival, but also his first true friend.