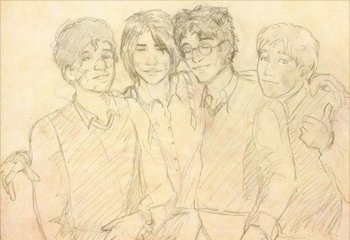 (who also drew the illustrations.)

The Shoebox Project follows the Marauders from the summer before sixth year through the first year or so of life after Hogwarts. It's a (very realistic) Remus/Sirius and James/Lily ship story, but fans also love it for its wit, style, excellent dialogue, and thoughtful treatment of each character. Hilarious, touching, overall just beautifully done.

For a while, it seemed as if the fic had been abandoned after the writers Livejournal page

was hacked in 2008. However, both Rave and Jaida have now confirmed that the fic is indeed finished. You can read it in full PDF version here

, Jaida Jones announced that she and Rave intend to write a new chapter and auction it off in order to donate the proceedings to charity.

on the CBS news, with co-author Jaida Jones available for comment.