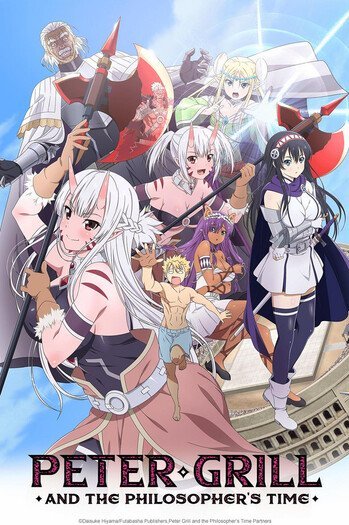 Peter Grill is an adventurer and the "strongest man in the world." While he has a girlfriend named Luvelia with whom he has sworn to spend the rest of his life, Luvelia still believes that babies are delivered by storks, and in the two years since their relationship began, Peter and Luvelia have not progressed beyond holding hands. In the meantime, various other women, such as two ogre sisters and an elf, all want him so that they can bear strong children. Peter has to avoid all manners of temptation and plots, all while feeling guilty toward Luvelia.

Peter Grill and the Philosopher's Time (known as Peter Grill to Kenja no Jikan in Japanese) is an Ecchi Sex Comedy fantasy manga written and drawn by Daisuke Hiyama. Originally starting out as a oneshot from the Having sex with Monster Wives anthology, the manga now runs in the Futabasha Seinen magazine Monthly Action since 2017. Seven Seas Entertainment has licensed the manga in English.

in November 2021. It's also been licensed by Sentai Filmworks.