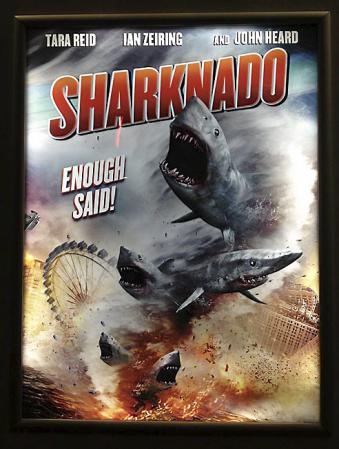 Disasters come in many forms. But none quite like this. A series of freak tornadoes hits the California coast, causing widespread destruction around Los Angeles.

But when said tornadoes start throwing hundreds of sharks around the city, that's where things get interesting.

The 2013 movie was a viral hit, with over five million views spread over the first three showings of the movie on TV and attention from celebrities such as Wil Wheaton and Cory Monteith (it was the subject of the latter's final two tweets before his death). Syfy immediately contracted The Asylum to make a sequel, the title of which was chosen with a Twitter contest. (The winner? Sharknado 2: The Second One.) Such follow-ups then become an annual event, roughly corresponding with the Discovery Channel's Shark Week, for an additional four sequels.

On July 10, 2014, the film received a much-needed skewering performed and simulcast live in theaters by the Rifftrax team.

An Endless Running Game for iOS called Sharknado: The Video Game was released in 2014.

The film crossed over into Riverdale with the 2015 comic, Archie vs. Sharknado that takes place at the same time as the Sharknado 3: Oh, Hell No!.

Tropes associated with the Sharknado films as a whole:

Tropes associated with the first Sharknado