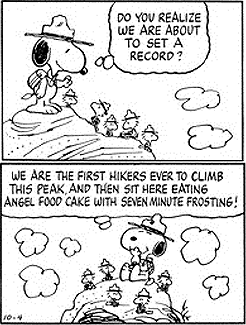 No, Oliver, I don't want your autograph!
Duff: Aye, but now they call me Roboduff! The world's deadliest golfing cyborg!
Kim: Wow, now that's a mouthful.
Ron: And really, how many other golfing cyborgs are there? It cannot be a crowded field.
— Kim Possible, "A Sitch in Time"
Advertisement:

This trope covers situations where something seems to be highly praised, and it's relative to an extremely small — or intrinsically awful — group (often a group of one), rendering the praise meaningless. Sometimes the intent is for the praise to be taken seriously (in which case it becomes a version of the Sharpshooter Fallacy), but the more frequent implication is that there isn't any larger category relative to which it can apply, making it a Stealth Insult (if the backhandedness of the compliment is not immediately obvious) or a form of Damned by Faint Praise (if it is). Sometimes the joke is that, even in such an incredibly narrow category, the thing being discussed still isn't first.

Creators may describe their own works this way as a form of humorous Self-Deprecation; it can also be a way to imply that a work, while bad, at least has a unique premise — it's better than any other of its type because there is no other. Sometimes it derives additional humor from the recipient taking it as a genuine compliment, either because they're dumb or because we the audience know something they do not.

The stock piece of dialogue that fits this trope goes something like:

Alice: Bob, you've always been my favorite son.
Bob: I'm your only son.

Contrast Mathematician's Answer, which is equally meaningless because it's too broad, and Suspiciously Specific Denial, where the specificity is worrisome because of everything it doesn't cover. Compare Everything Except Most Things, Trivially Obvious, Damned by Faint Praise. Also compare the Low Count Gag. ("Wow Alice, all your fans are out there!...All two of them.") See also Medal of Dishonor, which may be given out in cases like these. May figure in the plot of a Guinness Episode.

open/close all folders
Advertising
Advertising — Films
Done all the time unironically in film advertising the week after a film opens at the box office. Film ads that week will try to claim their picture was "the #1 film in America!" Anytime that isn't actually true, the ad will narrow the superlative down by genre, like "the #1 comedy in America!," "the # 1 thriller in America!," etc. This is especially egregious when it's a time of year where it has little competition.
Anime & Manga
Audio Plays
Comedy
Comic Books
Comic Strips
Fan Works
Films — Animation
Films — Live-Action
Jokes
Literature