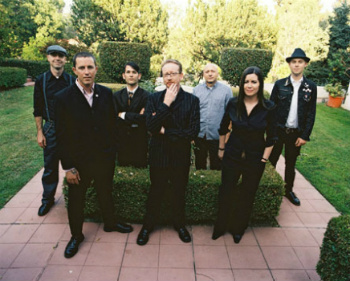 Flogging Molly is a celtic punk band from Los Angeles. They formed in 1997, due to a dispute between vocalist Dave King and Epic Records. King, the former lead singer for the 1980s British metal band Fastway, had planned to embark on a solo career and leave hard rock behind for a sound that hewed closer to the folk music of his native Ireland. Epic refused to let him use traditional Irish instruments in his music, causing him to leave the label to form a band with fiddle player Bridget Regan.

The band was originally signed to Side One Dummy Records, but beginning with their 2011 album, Speed of Darkness, they publish under on their own label, Borstal Beat Records. The band's music is heavily influenced by politics, and Irish culture and history, as can be seen in the songs "Don't Shut 'Em Down" and "Drunken Lullabies" respectively. In 2004 the band started doing a yearly tour called the "Green 17" tour, which still goes on to this day. They have currently released six studio albums and are still actively making music and playing live shows.

Tropes which apply to Flogging Molly: