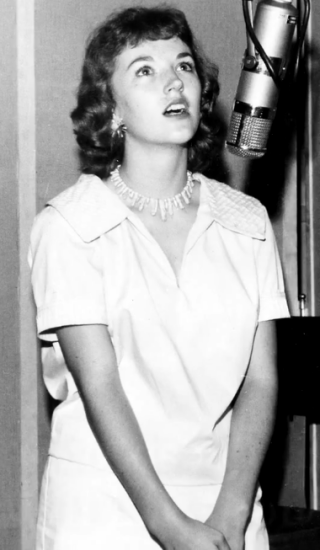 The quiet girl.
"Come along
Will there be sunshine shinin'
will we find a silver lining?
Come along. Sing a song
When today becomes tomorrow
will we find joy or sorrow?
Sing a song..."
—"Tomorrow Is Another Day"
Advertisement:

Shelby Flint (born September 17, 1939) is an American singer, songwriter, and musician with a distinctive, airy, and emotive soprano voice. She is arguably best remembered for her song performances in films such as Breezy, Snoopy, Come Home and The Rescuers, the latter of which was nominated for an Academy Award for Best Original Song in 1977. Notably, her serene, heartfelt vocal delivery and born-and-bred folk sensibilities were a huge influence on Joni Mitchell, who in turn influenced countless female singers to come. Shelby has recorded music in a variety of styles, from doo wop and folk pop, to disco and jazz.

Initially, Flint became known during the '60s for minor hits such as "Angel on My Shoulder" and "Cast Your Fate to the Wind". Never one for fame and fortune, after three albums she put her musical career on hiatus in order to raise a family. Her career started afresh with her aforementioned '70s soundtrack appearances, and during the '80s, with a genre shift to jazz, Shelby gained significant critical acclaim, with her self-titled jazz ensemble becoming one of the most in-demand jazz groups in the greater Los Angeles area. Since, Shelby has appeared as a session vocalist for a number of artists, and more recently, a reunion of her old jazz group took place, ostensibly with an album on the way.