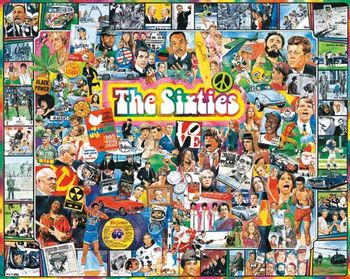 There's a good reason they're called the "Stormy Sixties".
"Come mothers and fathers throughout the land
And don't criticize what you can't understand
Your sons and your daughters are beyond your command
Your old road is rapidly agin'
Please get out of the new one if you can't lend your hand
For the times they are a-changin'."
— Bob Dylan, "The Times They Are A-Changin'"
Advertisement:

The Swingin' Sixties hold a special place in popular culture, mostly because the people who came of age in that decade cannot stop talking about how great it was.

The Theme Park Version of the Swingin' Sixties includes: "free love" and beehive and bouffant hairdos, hippies and southern sheriffs, Psychedelic Rock and girl groups, marijuana and the pill, sexy male spies in tuxedos and sexy female spies in leather catsuits (or in miniskirts with go-go boots, or in leather miniskirt catsuits), the Charlie Brown Christmas special, Peter Fonda dropping acid in a graveyard, prim newscasters speaking in clipped tones about those wild youngsters having too much fun, and everybody doing "The Twist".

In Britain it includes the rise of Carnaby Street (inevitably accompanied by The Kinks' "Dedicated Follower of Fashion"), Mary Quant (the Mother who Made Miniskirts Mainstream), Harold Wilson, the satire boom, and a bunch of Buccaneer Broadcasters demolishing The BBC's radio monopoly. It was all about the music: Mop-topped mods and cock-walking rockers all the rage, and the British were cool for the first time in recorded history. Except to the British, who were way into India. The Sixties gave us Woodstock, three days of peace and music. At the same time, there's the Harlem Cultural Festival

, which is the cultural high point of black pride and the Civil Rights movement concentrated in six weeks of music. And then a little later, Altamont, roughly six hours of skull-cracking brutality set to music.

Of course, much of this great music was made in the context of political unrest: Escalation of The Vietnam War was met with a powerful protest movement, admired (or vilified, depending on your viewpoint) to this day for stopping the war dead in its tracks just nine years later. President John F. Kennedy narrowly averted an end-of-the-world nuclear showdown, then was shot dead. Medgar Evers, Martin Luther King, Jr. and Malcolm X gave voice to the Civil Rights Movement, and then were shot dead. Robert F. Kennedy renewed the country's spirits with a message of hope and unity, and then was shot dead. Really, the only important political figures who survived the 60s alive were LBJ and Tricky Dick (Ronald Reagan was also on the rise, but he didn't count just yet). And he got shot too. This was the era of COINTELPRO, with Government Agents surveilling, infiltrating and discrediting Anti-War and other groups to the point of sowing distrust and paranoia among these groups to Philip K. Dick levels. This was not limited to the United States. France nearly had a revolution in May of 1968, with West Germany having massive protests as well. Social unrest in Italy ballooned into the Years Of Lead in the 1970s, as well as the Red Army Faction in Germany while Canada had Quebec separatist riots and terrorist bombings. Czechoslavakia attempted a Velvet Revolution, but the Soviet Union invaded to suppress the social change in 1968. In China, Mao Zedong launched the Cultural Revolution in 1966, and the country soon fell into chaos.

The Sixties were also the time of The Space Race — Following the launch of Sputnik in 1957, the first manned launches took place in 1961 (First Russian Yuri Gagarin in April, followed closely by Alan Shepard in May.) The idea of people actually entering space for the first time led to a new fascination with Science, and a corresponding boom to Science Fiction. John F. Kennedy ordered the seemingly impossible — putting men on the Moon. After his death, America's resolve was steeled, and the course was set. The route to the Moon was very nearly derailed by the disastrous Apollo 1 fire, claiming the lives of three American astronauts in a test. Over a year of unmanned testing went on, trying to repair the mistakes. A return to space flight in late 1968 led to an epic Christmas flyby of the Moon by Apollo 8, one of the most watched television broadcasts in history. Finally, in 1969, Neil Armstrong and Buzz Aldrin set foot on the Moon, fulfilling Kennedy's mission and marking the first time a human being had walked on another celestial body.

That's what you learn watching TV and movies about the Sixties. No Sixties Montage is complete without them. If not set to Jimi Hendrix playing "All Along the Watchtower" or "The Star-Spangled Banner", then "Get Together" by the Youngbloods.

But if you watch TV and movies from the Sixties, it's as if half of that stuff never happened. Some of the decade's landmark events, such as the Stonewall Riots in 1969 that kicked off the gay rights movement, were barely acknowledged until the 1990s. Our cultural memory has selected The Grateful Dead and Aretha Franklin from a musical landscape that had a lot more Herb Alpert and the Tijuana Brass than seems sonically possible; and the squares of the first half of the decade actually dressed a lot cooler than the hippies of the latter half, who frankly come off as a little grimy. A standout example of this is The Andy Griffith Show, whose title actor portrays a Southern sheriff and in which not a whisper of the civil rights movement is mentioned.

Nonetheless, the sheer volume of memorable songs, shows, books, and movies from the Sixties is testament to the creativity of its artists. The decade did give us Star Trek: The Original Series, Doctor Who, James Bond (the films, anyway), Spider-Man, Fantastic Four, Woody Allen, The Graduate, The Prisoner, The Beatles, The Rolling Stones, The Who, James Brown, Motown, Yves Saint Laurent, Underground Comics... the list goes on. Their continued popularity ensures the Sixties will be around for a long time.

Politically speaking, it began on August 28, 1963 with the March on Washington and the assassination of John F. Kennedy on November 22, 1963 and ended with the kidnapping of Patty Hearst on February 4, 1974, President Richard Nixon's resignation on August 9, 1974 and the Fall of Saigon

which was the final battle of The Vietnam War. Scientifically speaking, it begins with the launching of Sputnik 1 on October 4, 1957 and ending with the last Moon landing by Apollo 17 on December 14, 1972. Culturally speaking, it began with the release of Alfred Hitchcock's Psycho on September 8, 1960 and the US debut of The Beatles on The Ed Sullivan Show on February 9, 1964, and ended with the Tate-LaBianca murders on August 8 and 9, 1969, the disastrous Altamont Free Concert on December 6, 1969, and the breakup of The Beatles on April 10, 1970.

Economically, the Sixties was considered by economists the end of the post-war Golden Age for the Western world and also for a lot of the East, especially in the Iron Curtain. note This was the height of the post-war consensus, where workers had their highest wages, where the nurturing of a welfare state and planned economy in multiple nations led to a great reduction of unemployment. Some nations like France, during its Les Trentes glorieuses (Glorious Three Decades) could even boast "full employment". note This was also the era of mass redistribution of wealth as per Thomas Piketty, where the US and other European nations instituted taxes on the wealthy and invested it in public services, such as England's NHS, and Lyndon B. Johnson could declare a "war against poverty" without it sounding like a utopian claim. In England, this was an era of true class and social mobility, where a bunch of working class kids from Liverpool (like The Beatles) could become "bigger than Jesus" and certainly bigger than the Royal Family. As much as everyone associates The '50s with post-war stability and prosperity, The '60s was actually the truly flush era. Some critics blame the decade and the youth for ending the good times, while supporters insist people chose Liberty Over Prosperity. note Some historians and cultural commentators argue that part of the reason for the youth revolt and experimentation of this time was the greater sense of stability which allowed young people to think and engage critically with the parts of society, namely the nuclear family, the heteronormative norms and other unquestioned assumptions, that a more difficult period would otherwise not give them room to think greatly about. So yes, the stereotype about the "Greatest Generation" father mocking sixties kids for being spoiled and pampered is Right for the Wrong Reasons.

Works made during this time period include:

Works set (but not made) during this time period include:

Works set and made during this time period (at least mostly, as some say The Sixties lasted until the early '70s):

Works made, but not set, during the sixties

Anime and Manga
Comedy
Comic Books
Eastern Animation
Music
Rides and Attractions
Video Games
Theatre
Theme Parks
Western Animation
If you can remember the 60s, you didn't live in them.

If you don't remember the '60s, you lived in them.

If you didn't live in the '60s, you remember them.

Therefore, only people who weren't alive in the '60s can remember the '60s.

Set 10 years after the events of the first game in The '60s, the Soviet KGB have discovered that the President of United States is the Furon invader Cryptosporidium-138 and had destroyed the Mothership with Orthopox 13 along with it. After Pox manages to upload his mind into a holographic projector, Crypto must find the Russian Insurgence that threatens his mission. Alog the way he procures various human allies â including the beautiful Russia spy Natasha â and stop the KGB before they Destroy. All, Humans!

Set 10 years after the events of the first game in The '60s, the Soviet KGB have discovered that the President of United States is the Furon invader Cryptosporidium-138 and had destroyed the Mothership with Orthopox 13 along with it. After Pox manages to upload his mind into a holographic projector, Crypto must find the Russian Insurgence that threatens his mission. Alog the way he procures various human allies â including the beautiful Russia spy Natasha â and stop the KGB before they Destroy. All, Humans!