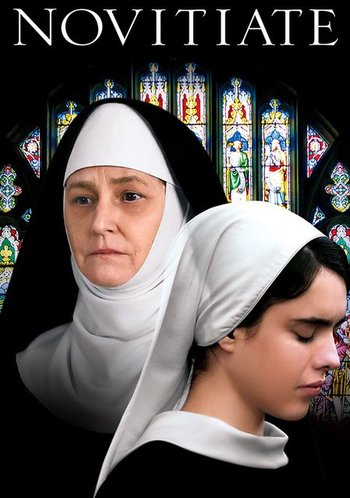 So many people settle for a love that doesn't really ask anything of them. That they don't have to make any sacrifices for. I don't want that. I want an ideal love that I have to give everything to.

It's 1964. Cathleen Harris (Margaret Qualley) is a Catholic convert, the daughter of a working-class atheist single mom (Julianne Nicholson). Feeling she has been called by God to devote her life to holy service, she enters the contemplative order of the Blessed Rose. One expects an enclosed convent to be strict, but Rev. Mother Marie Saint-Claire (Melissa Leo) is running the place like a Cult. The first thing she tells the aspiring postulants is that her voice must be regarded as a stand-in for God's, and asking any questions at all is grounds for instant dismissal.

Mother is unhinged, putting it mildly, but part of it is understandable. The Second Vatican Council called by Pope John XXIII is on, and is commanding numerous changes and reforms to common Catholic Church practices. Mother feels that the old ways are the Church's (and her) connection to God and without them the whole establishment (and her faith, her identity, not just her authority) will crumble. She's also pissed that nuns weren't given a voice at the council to speak about the changes that affect them in such crucial ways, and she lets the Archbishop know about it. To protect her faith and that of her nuns, she commits an act of extreme disobedience; she actually doesn't tell them about the orders for reform and openness that have come to her from higher up. To contrast with Mother Marie is one of her senior right-hand Sisters, novice mistress Mary Grace (Dianna Agron), who calls her out and opines that a more liberal approach to religion could be a good thing.

Meanwhile, the postulants and novices go through formation, learning the routines, testing whether their hearts and minds can be molded into the Holy Rule of the order and finding out that dedication to God is no easy life, particularly when your Reverend Mother is wound up tighter than a harp string.

Novitiate was created by Afro-American writer/director Maggie Betts and won a jury award at Sundance for direction. The crew as well as the cast were almost all women.

In the years that followed Vatican II, the Church witnessed a mass exodus of nuns on a scale it had never seen before. 90,000 nuns renounced their vocations and left their convents.