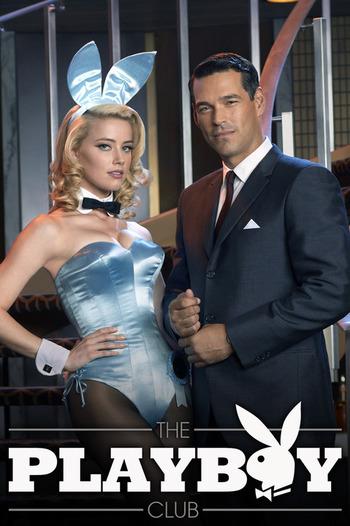 "The steaming, corrupt, crime-filled Windy City may have been all those things, but I built a place in the toddlin' town where everything was perfect."
—Hugh Hefner, Opening Narration in the pilot
Advertisement:

The Playboy Club is an American historical fiction drama television series that aired on NBC. It had a very short-lived run, from September 19 to October 3, 2011.

Set in 1961, the series centers on the employees (known as Bunnies) of the original Playboy Club operating in Chicago. While an ensemble piece, the series focuses mainly on Nick Dalton (Eddie Cibrian), a smooth high-powered attorney and Playboy Club key-holder who plans to run for state's attorney, but also harbors secret connections to organized crime, and Maureen (Amber Heard), a recently hired Playboy Bunny who was described as "innocent and naive to the ways of the city, yet is running from mysterious and unexplained things in her dark past." The cast is rounded up by Carol-Lynne (Laura Benanti), the original Playboy Bunny (and thus called the "Bunny Mother"), who is romantically involved with Nick; Janie (Jenna Dewan), a very provocative Bunny who is dating Max (Wes Ramsey), the club's bartender; Brenda (Naturi Naughton), an African-American Bunny who is seeking to be the first African-American Playboy Playmate; Alice (Leah Renee Cudmore), a Bunny who is secretly lesbian and in a marriage of convenience with a gay man, Sean Beasley (Sean Maher); Billy Rosen (David Krumholtz), the manager of the Playboy Club; and Pearl (Jenifer Lewis), the warm and well-loved Playboy Club seamstress who sews the outfits for the Playboy Bunnies, many of whom confide their secrets to her.

The series is most notable for how short-lived it was (given its promotion and production expenses) and its controversial portrayal of the eponymous nightclub as a backdrop for women's rights movements and changing gender attitudes during the 1960s. The show started making headlines during pre-production when it was revealed a then-unnamed actress had to sign a waiver in order to allow her being filmed topless, something unheard of in primetime television in the U.S. (the actress turned out to be an extra and the waiver was never exercised). It was also notable for being a Dueling Show with ABC's Pan Am, also a 1960s period drama obstensibly dealing with similar issues, and it was clear both networks were trying to cash in on the success of Mad Men.

The controversies detailed above drew the ire of Moral Guardians, and many viewers didn't buy into the show's style of drama, and it was quietly canceled after only airing three episodes (in fact, it had the misfortune of being the first new show of the season to be axed).