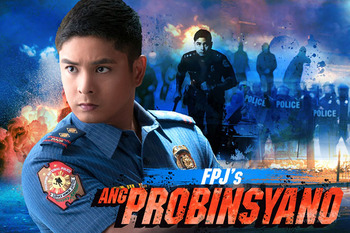 That Cop Show Filipinos adore since 2015.
Ang Probinsyano is a Philippine action series which started airing in September 28, 2015. It is a television series based on a 1997 film of the same name by famed action star Fernando Poe Jr. The series revolves around Cardo Dalisay who is a police officer and at times a vigilante and his pursuits against crime and corruption.
Advertisement:

Like in the original film, Cardo Dalisay's twin brother Ador was killed while conducting a police operation. He poses as Ador in an effort to avenge his brother and take down the crime syndicate responsible for his death. The series then deviates from this.

After being successful in his initial goal, he starts his own family but had his son killed after a terrorist attack. He went undercover and joins the Pulang Araw with the intent of dismantling the rebel organization. There he learns the truth that it was just a faction led by Alakdan who was responsible for his son's death, and the actual organization was fighting for legitimate grievances.

He later forms a group called Vendetta, a vigilante group to fight against crime and corruption with former Pulang Araw members aligned to him. His group went against the Kamandag (lit. "Venom") terrorist group, a splinter group led by Alakdan, and a gun-running ring, both backed by politicians. The Vendetta took on the corrupt administration of President Lucas Cabrera who ascended to presidency as his predecessor Oscar Hidalgo went missing after an assassination plot.

Vendetta went on to restore Hidalgo as president and its members were pardoned and reintegrated back to mainstream society. Cardo was then reinstated in the police along with his former vigilante/insurgent comrades as part of a special task force.

The first season is currently available on streaming

at Netflix, where it is known under the English title, Brothers.

Tropes found in Ang Probinsyano include: