Series / Planet of the Apes 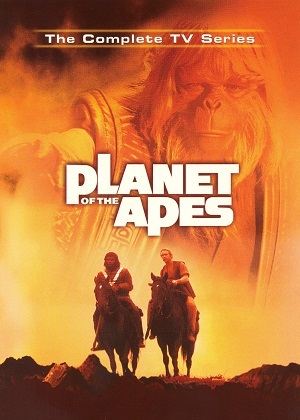 In 1974, a short-lived series was released based on the Planet of the Apes franchise. It ran for 14 episodes before being cancelled.

Joe Ruby and Ken Spears were brought in by then-CBS head Fred Silverman to serve as story consultants, due to the allure of the premise to children.

The plot is simple; on August 19, 1980, two astronauts—Burke (James Naughton) and Virdon (Ron Harper)—encounter a space-time warp whilst exploring space near Alpha Centauri, causing them to crash upon an alien world that they soon discover is actually a post-apocalyptic Earth in the year 3085, where a civilization of bipedal apes now rules over a cowed and submissive humanity. Escaping the cabal of orangutans who seek to execute them for fear that they will spark rebellion amongst the native humans with the aid of a sympathetic chimpanzee named Galen (Roddy McDowall), they go on the run, drifting randomly across the known world of the ape-ruled territories in hopes of finding some way to return to their own time.