Monkeys on a Typewriter 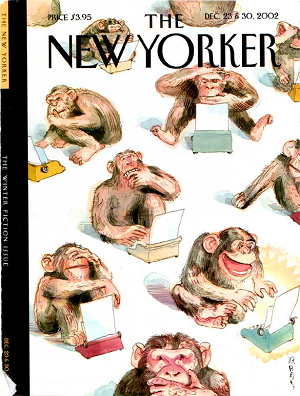 Journalism can be such a monkey business.
"This is a thousand monkeys working at a thousand typewriters. Soon, they'll have written the greatest novel known to mankind. Let's see... 'It was the best of times, it was the blurst of times'?! You stupid monkey!"
— Mr. Burns, The Simpsons
Advertisement:

A standard thought experiment from probability theory states that a million monkeys hammering a million typewriters (or a hundred, or a thousand) will, given sufficient time, eventually bang out entire works of Shakespeare (or Dickens, or all the books in the British Library) by complete accident.

This is a vivid enough mental image that it gets referenced a lot in fiction.

One common joke is to assume that the quantity of monkeys and/or allotted time required to write something is proportional to its artistic merit, so Shakespeare might take a million monkeys a million years, but three monkeys could write The Room in half a day. This isn't actually true (in fact, all that matters is the length of the text that the monkeys are replicating), but it is funny. When we start throwing infinity in it (which is implied by the "eventually" in the first sentence of this page), then either one monkey is enough given an infinite time, or among infinite monkeys typing (for example) 400 pages each, one will type a particular 400-page text on the first try.

While they are part of the most common descriptions of this idea, versions involving "thousands" or "millions" of monkeys may confuse someone into thinking there is some kind of practical possibility of producing Shakespeare with monkeys, if we could only wait for a few million years. Some paraphrases of the problem even forget to mention the "eventually" or "infinite" part and say that you just need "a million monkeys for a million years". In fact, even if you replaced every atom in the universe with a monkey and a typewriter, and they all typed a thousand characters per second, the odds of their producing Hamlet (as well as the odds of any other specific text of the same length) within an dsafljcxzillion ancjlaeladhaclaketlillion years are still incomprehensibly bad. However, such huge quantities of monkeys and time are no match for infinity, which is where the magic happens.

The point is that the monkeys are flailing at the keys without actually understanding the point of the object they're interacting with. Given enough time or enough monkeys, or both, one of them will accidentally hit the keys in the order "[shift]T-o[space]b-e[comma][space]o-r[space]n-o-t[space]t-o[space]b-e..." There is also some non-infinite yet unimaginably large number of years within which typing Hamlet has a probability of 99%, but the chance still doesn't reach 100% until infinity.

A lot of writers will absolutely jump on this as an opportunity for Word Salad Humour. See also Who Writes This Crap?!.

Robert Wilensky complemented this with the statement that "Now, thanks to the Internet, we know this is not true." For further reading, see the Other

You'll never believe how this trope page was written.

Burns shows Homer a room containing a thousand monkeys chained up to a thousand typewriters. He's hoping that they'll write "the greatest novel known to man". He also appears to have gotten them addicted to nicotine, as one has a cigarette and another is seen with a pipe.

Burns shows Homer a room containing a thousand monkeys chained up to a thousand typewriters. He's hoping that they'll write "the greatest novel known to man". He also appears to have gotten them addicted to nicotine, as one has a cigarette and another is seen with a pipe.