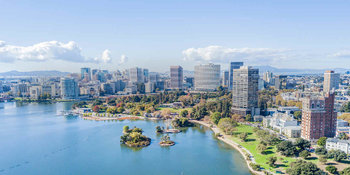 Oakland is a city on the East Bay section of the San Francisco Bay in California.

Oakland is often described as "The City Across the Bay," "the Town," and various other names comparing it as to be basically San Francisco's younger brother. Oakland is most well-known for being the home of Major League Baseball's Athleticsnote Oakland was previously the home of the NFL's Raiders, who moved to Las Vegas in 2020 (and had earlier moved to Los Angeles in the 1980s before returning to Oakland for a second stint in the mid-90s), and the NBA's Golden State Warriors, who moved across the bay in 2019. The fate of the A's in East Bay is still up in the air, depending on whether or not they can secure a new modern ballpark. However, there has been speculation that the A's, much like the Raiders (with whom they shared the exact same stadium prior to the latter leaving Oakland) before them, might relocate to Vegas. Portland is another possible landing spot for the A's, given that city's lobbying for a MLB club, high crime rate, and for being the ending-point of the Transcontinental Railroad.

The population currently stands at 420,000, making Oakland the 45th-largest city in America. It is a major West Coast port, in fact one of the five most important ports in the country.