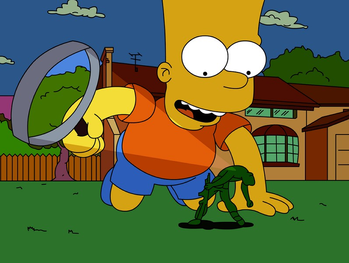 "God is a mean kid sitting on an anthill with a magnifying glass, and I'm the ant."
— Bruce, Bruce Almighty
Advertisement:

Someone uses a magnifying glass or similar optical instrument to concentrate sunlight to kill, burn, or melt something. This may take a few different forms.

Children at play may experiment with using setting fires or killing small insects with a magnifying glass. At times this may be used to demonstrate that the child is an Enfant Terrible, or (in works written from the perspective of the insect) that Humans Are Cthulhu. On the other hand, sometimes children who do this are just portrayed as scientifically curious.

In some cases, a larger lens may be used as an Improvised Weapon. Many attempts at this — both fictional and real — are inspired by the story that the ancient Greek scientist and engineer Archimedes used this sort of contrivance to destroy a Roman fleet during the 214-212 BCE Siege of Syracuse. Supposedly, he focused the rays of the sun using an array of polished shields, mirrors, or lenses. (Sadly, MythBusters tested this example of the trope — three times — and found it less-than-effective.)

Finally, people stranded in the wilderness may use magnifying glasses in order to set the fire they need to survive. Which is possible, although often difficult.

This trope may seem fairly modern but it's in fact Older Than Feudalism. In Aristophanes' ancient Greek comedy The Clouds, the gods use a set of mirrors or lenses to ignite the Olympic Torch (a smaller device traditionally lights the torch for the running in modern days).

Also, this is Truth in Television. It works, but not as quickly as usually depicted.

Related to The Power of the Sun and Sundial Waypoint. Not to be confused with a Kill Sat, which uses a remote controlled satellite and may or may not actually use sunlight.