Web Video / Half in the Bag 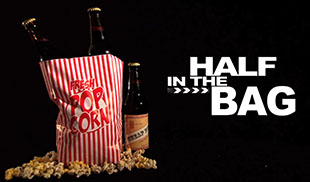 Half in the Bag is a movie review web series by RedLetterMedia. It features Mike Stoklasa and Jay Bauman as "Mike and Jay," employees of Lightning Fast VCR Repair who pass the time avoiding work by chatting about new movies they've seen.

The framing tale has Mike and Jay attempting to fleece Mr. Plinkett (Rich Evans), a clueless and misanthropic senior who hires them to fix his VCR. Instead, Mike and Jay just sit around drinking beer and discussing movies while billing Plinkett for work they're not doing. Over the course of the series, the pair become embroiled in all manner of ridiculous high jinks, yet nothing ever seems to distract them from getting down into detailed discussions about modern films.

The show has featured numerous guest critics, including Tim Heidecker, Samurai Cop star Matt Hannon, a self-appointed Milwaukee superhero known as The Watchman, and Macaulay Culkin. Other members of RedLetterMedia occasionally drop in playing one-off strangers with a paper-thin excuse to talk movies.

Half in the Bag gives examples of: