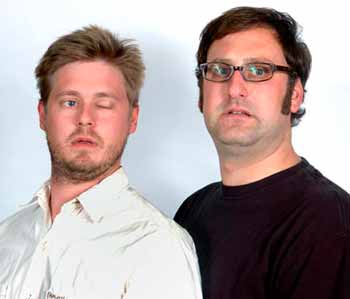 Timothy Richard Heidecker (born February 3, 1976) and Eric Alexander Wareheim (born April 7, 1976), Tim & Eric for short, are a comedy/video art duo from Pennsylvania who specialize in antihumor. They met as undergraduates at Temple University in Philadelphia (Eric is from nearby Norristown, while Tim is from Allentown, a bit further away). They are best known for their Adult Swim shows Tom Goes to the Mayor, Tim & Eric Awesome Show, Great Job!, Check It Out! with Dr. Steve Brule, Tim & Eric's Bedtime Stories, and Beef House, as well as the 2012 film Tim & Eric's Billion Dollar Movie and its upcoming sequel Tim & Eric's Trillion Dollar Movie. In addition, they also:

Known for their unique brand of comedy (if it can even be called comedy) which incorporates surreality, both humorous and horrifying, if not outright nightmarish, as well as deliberately egregious visuals in the style of tacky amateur videography and low-to-no budget public access television, complete with Bad "Bad Acting". As a result, they and their works are fiercely polarizing, mostly in the classic form of "either you get it or you don't." Their own statement on Awesome Show is that it was "the nightmare version of television."

Oh, and by the way: Yes, those were made on drugs. Just not when they were working.