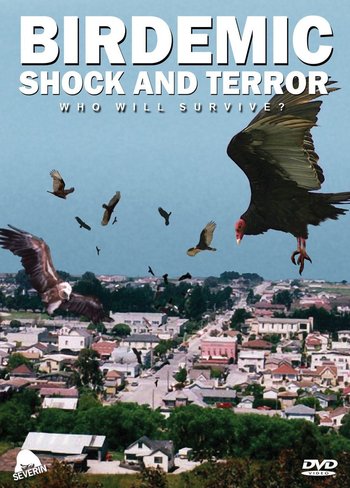 Birdemic: Shock and Terror is a 2008 American independent horror film written, directed, and produced by James Nguyen. It's a Whole Plot Reference to Alfred Hitchcock's The Birds and tells the story of a romantic couple whose relationship is interrupted by a sudden attack of killer birds, with a very overt Green Aesop.

Made with No Budget and vigorously promoted by Nguyen by means including driving a minivan blaring bird noises and adorned with stuffed birds, fake blood and paper signs (some of which misspelled the film title) around the Sundance Film Festivalnote In case you're wondering, the festival rejected the film., the film was shown at a couple festivals in 2008 and 2009 (including Sundance!), and then had a small theatrical run in 2010.

It was released on DVD and Blu-ray in February 2011. The film was introduced to the wider world by Tim Heidecker and Eric Wareheim of Tim & Eric Awesome Show, Great Job!, and has since become infamous for its So Bad, It's Good nature.

A sequel, Birdemic 2: The Resurrection, has been released. In 3D! And yes, it's even worse than the first movie.