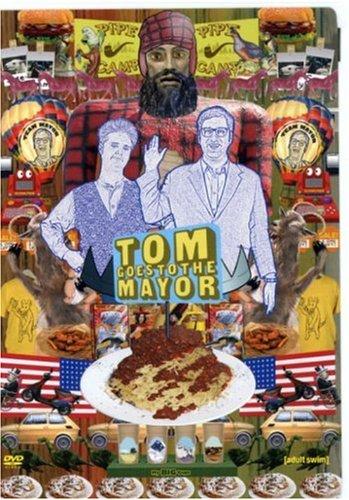 Tom Goes to the Mayor is an animated comedy show on Adult Swim by Tim Heidecker and Eric Warheim, the creative team that later did Tim & Eric Awesome Show, Great Job! The show revolves around Tom Peters, resident of Jefferton, and Jefferton's Mayor. Nearly all of the show's plots revolved around an idea Tom wanted to implement for the city of Jefferton, or for seeking help with the Mayor, whom he considers a friend, for personal problems. However, the Mayor has other plans, whether intentional or not, and usually things don't work out for poor Tom Peters.

Tom Goes to the Mayor was unique for its animation style - instead of using more traditional methods, pictures of live actors would be taken, and then be filtered through Photoshop to look like mimeographs. These "mimeographs" would then be "animated" in what was in effect about a frame every two seconds. All other objects and backgrounds were typically animated using stock clip-art, and shows within the show would be live-action.

Lasted about 30 or so episodes before Tim & Eric decided to go for Tim & Eric Awesome Show, Great Job! instead, though some elements and characters were essentially transferred to the new show, such as Channel 5's "Married News Team" and various skits. The Awesome Show episode "Pepperoni" opened with a live-action mini-sketch based on Tom Goes to the Mayor.

This shows provides examples of: