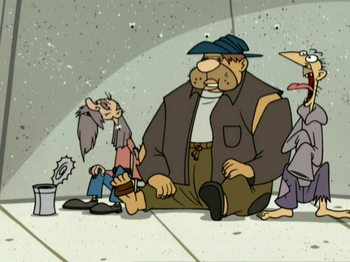 "I worked forty years as a fireman, boy / On the Pennsylvania line / And I ended up / just a derelict / Drinkin' Boone's Farm apple wine / Oh where can a bum find bed and board? / When you gonna make it stop rainin' lord?"
— Warren Zevon, "Stop Rainin' Lord"
Advertisement:

Hobos are either homeless people viewed through an industrial-strength Nostalgia Filter or living Americana: freewheeling folks, usually men, who for any number of reasons live a wealth-free life, stowing away on freight trains and moving from town to town looking for campfires and a good can of beans. The Great Depression Theme Park isn't complete without these boxcar barons.

Having been everywhere, seen everything and met everyone, hobos are full of tall tales and song — not to mention sage advice. Some may claim to have been men of status (i.e., mayors or heavyweight champs) brought low by dumb luck, while others willfully renounced the stationary life. Both varieties of hobo will recount his story in detail, if you have the time.

These regents of the rails are never far from train tracks and almost always carry Bindle Sticks. Their natural habitats are moving boxcars and campfire circles, though ramshackle hobo metropolises do occur. Any gathering of five or more hobos will feature a hobo gentleman, identified by ragged top hat, cane and swagger.

Unlike street persons or the colloquial bum, hobos prefer rural settings, rarely panhandle, and generally conduct their affairs with some sense of dignity and etiquette. Newcomers to hoboism are often adopted by old timers and taught to observe some variety of "The Hobo's Code". When and how a hobo receives his nickname is unclear, but every hobo has one — it's usually "Boxcar" something.

Hobos are allergic to hard work, unless promised beans or alcohol, and are magnetically attracted to pies cooling on the window sill (whose aroma may cause spontaneous levitation). Kindly old women and farmers' daughters are friends of the hobo; police officers, bulldogs and employees of the railway ("railroad bulls") are natural hobo predators.

Bonus points are awarded whenever a hobo plays the harmonica.

Note: This applies only to hobos as a trope. Real Life hobos allegedly prefer to think of themselves as homeless travelers subsisting on odd jobs, whereas tramps travel without seeking work and bums do neither. We've yet to verify this with one of their rank, and note that calling a tramp or bum hobo elicits the same nonverbal response as calling him Gargamel. (Unless his name is Gargamel.)