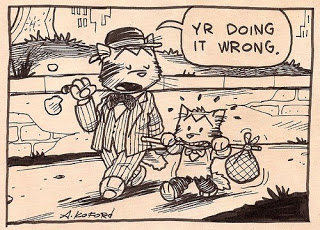 "I have to ask: what even iz a cheezburgr?"

A Retraux webcomic written and drawn by A. Koford, telling the story of Kitteh and Pip, anthropomorphic hobo cats, spending their lives "ramblin', loiterin,' wanderin' and avoidin' arrest". The action takes place at the beginning of the 20th century, but the dialogues are written in lolcat english.