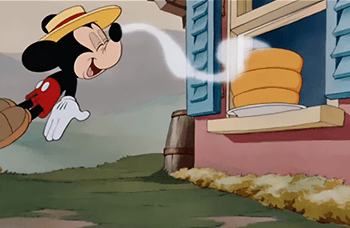 "Alright Peter, the important thing when you're on a diet is willpower. Now I'm going to put this steaming pie on the windowsill to cool. Now no matter how many beckoning fingers that steam morphs into or how badly it tries to sneak its way up your nose, I want you to resist the urge to levitate off the ground and float towards the pie."
— Glenn Quagmire, Family Guy, "Amish Guy"
Advertisement:

For humans, the sense of smell is one of the main ways we are drawn to food, so this naturally shows up a lot in fiction.

In comedic or cartoony situations, a character will be shown being physically lifted off the ground and floating toward the source of a delicious smell. In older Looney Tunes-style shorts the vapors of scent will often be clearly visible, physics aside, and sometimes the vapor will actually develop hands that will lift the character.

Villains will sometimes build a trap around this trope and ensnare an unsuspecting hungry person.

Often an example of Visible Odor. Compare The Nose Knows.