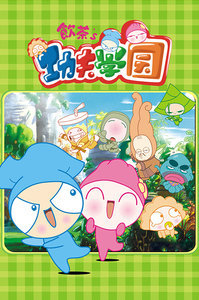 Yamucha's-Kung Fu Academy (饮茶之功夫学园) is a Chinese-Taiwanese comedy animated series created and produced by Hong Ying Animation. While this studio is best known for animating outsourced cartoons, Yamucha's is one of the few locally-produced works they maintain.
Advertisement:

With many characters being food, the show focuses on the young martial arts students Miko and Nao and their training at a renowned but antiquated academy in Yincha Town, as well as their friends and the villains they face, including a group of idiotic squid thieves. The show premiered on New Years Day 2007 on China's CCTV network and was moderately successful and well-received with a total of 208 episodes. It is available on Chinese streaming sites including iQIYI.

Yamucha's started as a group of fifteen web shorts released in 2004 which lack dialogue.note There was also a Japanese website

dating from 2003, but little of the Yamucha's brand materialized in Japan, such as this music video

. These shorts spoofed Chinese cinema (including wuxia), Jurassic Park and Titanic.note This video

has thirteen of the web shorts. The TV show reimagined most of the main characters as students or staff of a kung fu academy.

While the TV show may lack an English dub, it was given an English trailer

where the show is titled The Gongfu Class of Yincha.

Named after the Cantonese custom of dim sum and tea consumption known as yum cha, it has no relation with a Dragon Ball character.