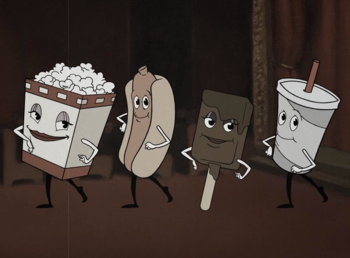 It's a groovy time for a movie time...
Advertisement:

Basically any situation where food, usually very recognizably human-made food like pizza or cake, comes to life and moves around. Walking hot dogs, singing vegetables, muffins that beg to be eaten, that sort of thing. This may lead to a Let's Meet the Meat situation if people decide something running around talking isn't a good reason not to eat it. Similar to Funny Animal, and sometimes found with them, but for common foodstuffs. Usually a cartoon trope, for obvious reasons. This often uses the most stereotypical possible foods. Hotdogs will be bright red, in a bun, and with a perfect line of mustard, for example.

This trope is ubiquitous in advertising, and just about any snack food will have a smiling, or sometimes skateboarding, version of whatever it's selling on the packaging. Almost every company that makes food has pulled this at some point.

This Trope is very often found in a Level Ate setting. May be combined with Plant Person where veggies are involved. Sometimes the anthropomorphic qualities are projected by someone who wishes the food were a person. This is seen in the trope Companion Food. Can wear an Edible Theme Clothing if wrappers or peels are involved,

Different from It Came from the Fridge in that this isn't caused by poor housekeeping and isn't necessarily rotten food, though there is overlap. Different from Let's Meet the Meat in that this is food that talks to you after it's been fully prepared, and whether or not it will be eaten may never be brought up. A walking steak would be an example, a cow wouldn't. Live animals that can be eaten are not this trope! A subtrope of Animate Inanimate Object.

Warning: Examples of this trope may become Talking Poo if ingested.

Rolland Dupain - a disgruntled baker with an obsession with tradition - is akumatized into Bakerix, a Gaul made of bread who intends to turn back the clock one rampage at a time.

Rolland Dupain - a disgruntled baker with an obsession with tradition - is akumatized into Bakerix, a Gaul made of bread who intends to turn back the clock one rampage at a time.