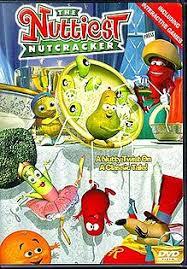 The Nuttiest Nutcracker is a 1999 direct-to-video Christmas movie, an all new take on the classic Nutcracker tale.