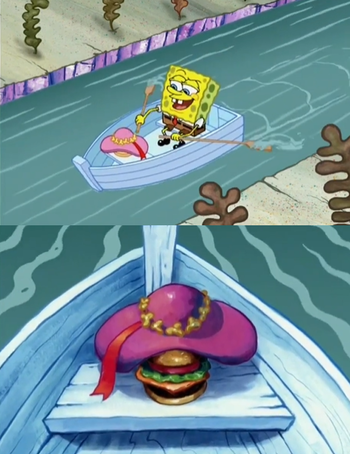 The only thing weirder than a burger with a hat on is a sea sponge wearing clothes.
Louise: This smell is worse than when Gene kept a turkey sandwich as a secret pet for a year.
Gene: Steve Turkel. He was my best friend.
— Bob's Burgers, "Eggs for Days"
Advertisement:

Some food is just too good to eat. Maybe someone special made it or it's the only one of its kind. If the love for it overpowers the desire to eat it, then it probably becomes Companion Food.

Companion Food is when someone keeps an item of food for longer than sanitary, necessary or appropriate. Characters who do this usually receive scorn for it, as even through refrigeration or freezing food can't last forever. What's worse is if they don't put in any effort to preserve it; its days are numbered, and sooner or later it'll start to smell.

The word "companion" originally means "someone to share bread with", but in this case for this trope, your companion IS the bread.

The trope usually coincides with Anthropomorphic Personification, as the characters who keep the food may give it terms of endearment and talk to it. An even stranger direction the trope takes is when the person has a romantic attraction to the food, and as a result may cross over with Why Don't You Marry It? and Cargo Ship. Characters who engage in Companion Food are often Cloudcuckoolanders with a vivid imagination. They could also be a Big Eater with a passion for food.

The food in question may be a fruit or vegetable that the character is growing. It isn't inappropriate if they spend long amounts of time with it because it isn't decomposing yet, but it's still odd if they love it like their child.

The trope typically ends with people eating it (or at least trying but risking their own health) or throwing away the food. This usually accompanies feelings of regret and grief. Thus they recover from their obsession and realise that food isn't meant to last forever, nor does it need to. If someone else eats the food, it usually leads to an argument despite the absurdity.

If the food is in the form of an animal that has to be eaten, that belongs to its own trope. Subtrope of Companion Cube. Compare Adopt the Food, Anthropomorphic Food, Animate Inanimate Object, It Came from the Fridge.