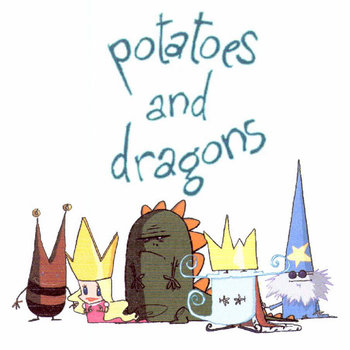 L to R: Riri, Princess Melody, Dragon, King Hugo III, Merlin
Hey ho, away we go, get the dragon, get the dragon
Hey ho, away we go, get that nasty dragon!
—Lyrics in the theme song.
Calm reigns over the kingdom of the potatoes. A castle, rolling hills and ... THE DRAGON'S CAVE. There is a curse on Hugo III, king of the potatoes. To put an end to this calamity, Hugo III calls upon all knights specialized in dragon slaying, promising his daughter's hand to the successful candidate. From that moment on, all manners of knights, for the most part unratified, try to vanquish the beast and win the royal beauty.
—Lifted directly from its homepage.
Advertisement:

Potatoes and Dragons (2004) is an animated series, produced by the French studio Alphanim and the Canadian studio Cinar/Cookie Jar Entertainment. The show takes place in a kingdom, run by the moderately competent King Hugo III, with a dragon living in it. The dragon makes a regular game of torching the king; thus, the king hires knights from all over the world (read: whoever shows up gets the job). The king's daughter Melodine, the jester Riri, and a little kid named Juju all know the dragon is harmless, and defend him from the competent knights.

It also aired in Canada on Teletoon and in Australia, Europe, and the USA on the Cookie Jar Toons block on This TV. It's short, sweet, and rather cute.

This show exhibits the following tropes: