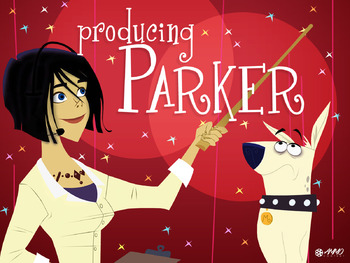 Producing Parker is a 2009 Canadian adult-oriented animated series that aired on TVtropolis and Global Television Network. Created by Laura Kosterski and Carolyn Newman (with Kevin Gillis, creator of The Raccoons, as a producer), the series was produced by Breakthrough Entertainment (better known for their Teletoon shows like Atomic Betty and Jimmy Two-Shoes) and ran until 2011 with a total of 2 seasons of 26 episodes.

The show is about Parker Kovak (voice of Kristin Booth), a single woman in her late-20s who finds herself overworked and underpaid as the producer for The Dee Show, the highest-rated female-targeted daytime Talk Show on the Bellamy Broadcasting network and hosted by the decadent, self-absorbed, high-maintenance Dee (voice of Kim Cattrall). The series revolves around the day-to-day antics Parker faces as she puts up with Dee, gets her show on the air, and interacts with the rest of the behind-the-scenes crew of the show, including Brilliant, but Lazy screenwriter Simon Nolan (Aron Abrams), promiscuous and airheaded intern Chicago Hyatt (Sarah Cornell), young network president and Parker's crush Blake Bellamy (Peter Keleghan), Dee's Camp Gay makeup stylist Russell (Jamie Watson), and multi-skilled handyman Hal (David Huband). There's also some focus on Parker's life outside of TV, where she finds companionship in her intelligent and sophisticated pet dog and best friend Massimo (also Jamie Watson).