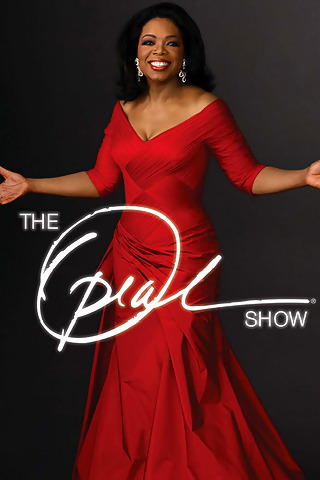 The Oprah Winfrey Show (1986—2011), which (along with its host) was often called simply Oprah, was one of the most (if not the most) popular and influential daytime talk shows in the history of television, to the point where most people probably think about Oprah when they think of a daytime talk show. It's also the longest-running and highest-rated show in that genre. Basically, just about everybody in the United States and no small number of people elsewhere know who Oprah is.
Advertisement:

This show turned Oprah Winfrey into a merchandising juggernaut. Whenever she sticks her Book Club sticker on a piece of literature, rest assured that the book in question will shoot to the top of the bestseller list (though this has caused her some controversy before). She's turned Dr. Phil, Dr. Oz, Rachael Ray, and Nate Berkus into successful talk show hosts in their own right. Finally, she's had some episodes over the years that have become iconic TV moments, including Tom Cruise's couch-jumping, the "Weight Wagon" show (where she wheeled out a wagon of fat to demonstrate the weight she had lost), and the infamous episode where everybody in the audience received a new car.

However, there's been some controversy where Oprah is concerned. When Mad Cow Disease fears were at their peak in the '90s, she said that the fears stopped her from eating meat, which caused the beef industry to sue her for defamation. As a result, her show moved to Texas for a month so she could continue filming during the trial. Another such incident was the Book Club endorsement of books that were extremely dubious, like James Frey's supposedly-autobiographical A Million Little Pieces: when it turned out that Frey had made it all up, she had him on and tore him to pieces.

It may be a target for mockery, it may be a Guilty Pleasure, it may be So Bad, It's Good, but there's no denying that whatever you feel about it, it's easily one of the most iconic daytime TV series in history. Oprah also proved she wasn't going anywhere; though the show ended on May 25, 2011, she soon afterwards launched the Oprah Winfrey Network.