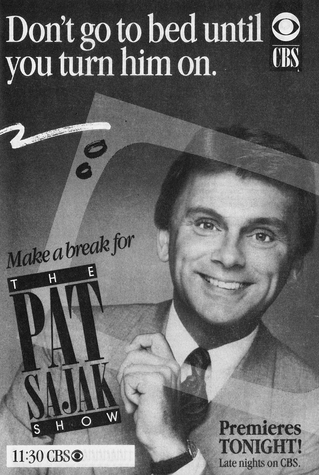 That's right. Someone actually thought that tagline was the best choice for this print ad.
Advertisement:

Knowing that Johnny Carson would soon wind down his time on The Tonight Show, CBS wanted to have their own show established by the time Carson retired (also, their late-night ratings at the time were abysmal). Enter CBS Vice-President of Daytime, Children's, and Late-Night Programming at the time, Michael Brockman, who had known Sajak since their days at NBC in the 1970s.

In 1988, Sajak was hosting both the NBC daytime and syndicated nighttime versions of Wheel of Fortune, which he had done since 1983 (well, actually, he'd hosted the former since 1981, but pulled double duty on both versions once the latter debuted in '83). When he and CBS announced this talk show, Sajak left the daytime Wheel shortly into January 1989, where he was replaced by Rolf Benirschke and later Bob Goen, and continued with the nighttime version as he does today. (Funny enough, in July '89 the daytime Wheel moved to CBS and began taping at Television City, where Sajak taped his talk show. This led to a segment in mid-July where Pat walked downstairs to the Wheel set and surprised Goen and Vanna White.)

CBS spent $4 million on a new sound stage at Television City in Los Angeles, the same sound stage now used by The Late Late Show with James Corden. Sajak's announcer/sidekick was a great friend of his, Dan Miller, whom Sajak had worked with at WSM-TV (now WSMV), Nashville's NBC affiliate, in the 1970s. Jazz musician Tom Scott was hired to be the bandleader. The show would follow Carson's usual format of a monologue, and then chatting with celebrities. Sajak even said they would "steal liberally" from talk shows past and present. From January-October '89, the show was 90 minutes long. It was then cut down to 60, as CBS thought an hour was better for a late-night talk show.

Ratings were strong for the first week (in fact, the show led all late-night programming), and reviews were good...but the novelty wore off in the second week and ratings began to drop. Big time. A week before Sajak's show debuted, The Arsenio Hall Show premiered in syndication and was a surprise hit. By August 1989, Sajak trailed Carson, Hall, Late Night with David Letterman, and ABC's Nightline in the ratings. Ratings were even below those of CBS' old late-night block. Cancellation rumors soon started to spread. Reviews also went in the opposite direction.

The show made it through 1989. Somehow. Washington Post television critic Tom Shales called it the third-worst show of the year in his year-ending column (oddly enough, Hall's show placed second on that list, great ratings be damned).

In February 1990, producers made many changes: Sajak's monologue was dropped. The couch, desk, and backdrop were removed, and replaced by a round table and some chairs. Miller was no longer a sidekick; he came in during the show's final segment. The biggest change of all was having a Guest Host on Fridays.

The show's most infamous episode aired on March 30, 1990: guest host Rush Limbaugh attempted to gauge audience members' thoughts on a bill that would've restricted abortion in Idaho being vetoed. He ended up arguing with pro-choice advocates, and was forced to conduct an interview with escort agency owner Sydney Biddle Barrows in another studio. He then returned to the regular studio to talk about affirmative action, only to be shouted down by members of AIDS Coalition to Unleash Power (ACT UP). He was forced to conduct the final segment without a studio audience.

Despite the changes made, ratings continued to be bad. Affiliates began pulling the show for syndicated programming. KDKA in Pittsburgh wanted to drop the show, but thought the ratings would keep them from having to take that course of action themselves.

They were proven right. Sajak hosted the show for the final time on April 5, 1990, then left the United States for a pre-planned trip to Europe. Five days later, CBS mercifully dropped the axe, saying the show would end that week. With Sajak on the other side of the pond, that meant someone else would ride the show into the sunset. On April 13, 1990, Mexican comedian Paul Rodriguez got the honor of laying The Pat Sajak Show to rest. In many markets, Sajak's show ended up being replaced by Hall's on CBS affiliates.

In a 2015 interview with Mark Malkoff on The Carson Podcast, Sajak said that the show failed simply because he didn't put out a show people wanted to watch, but that he had no regrets about doing it. He can always take solace in the fact his show lasted eight months longer than The Tonight Show with Conan O'Brien, and over 13 months longer than The Chevy Chase Show.