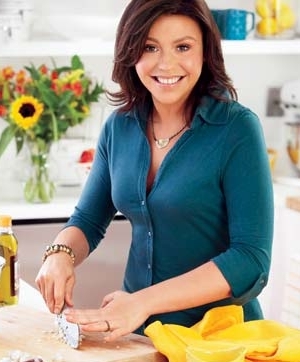 Rachael Domenica Ray (born August 25, 1968) is an American television personality, businesswoman, celebrity cook and author best known for her show 30 Minute Meals on the Food Network, being one of the biggest draws for said network's male audience, and for her perky personality. She also hosts a Talk Show, which is syndicated by CBS.

It should be noted (and is constantly noted by actual professional chefs who overhear people getting this wrong) that she isn't a chef. She is, rather, a former sports-journalist who taught herself to cook; her cookbooks were ghost-written for her by actual chefs, and the recipes she uses on her show are likewise prepared for her by actual chefs. This should not be construed as taking anything away from Ms. Ray's charisma or her talent as a television host, or from her enthusiasm for and talent at cooking.