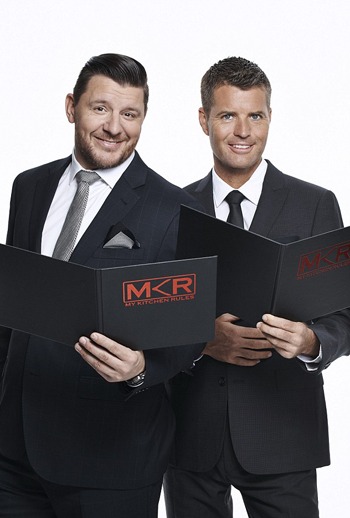 My Kitchen Rules is a cooking reality show that debuted in February 2010, and has been running in Channel Seven ever since.

Inspired by MasterChef Australia, the series follow a group of two-people teams, each representing the different states of Australia, as they compete against each other in cooking matches. Every season begins with an "Instant Restaurant" round, where the teams are separated into 2 groups, and are tasked to set-up their homes into a themed restaurant and prepare a three-course meal — consisting of an entree, main course and dessert — to the judges and their opponents. The guest teams would then judge the overall meal with a score out of 10, while the judges will grade each separate dish with a score out of 10. The team with the lowest score will be eliminated from the match.

The following rounds typically consist of a series of various challenges, that is:

The final rounds uses a similar format to the Sudden Death battle, but with an additional difficulty spike for the Grand Finals — where, instead of plating a three-course meal for 6 judges, the teams are required to cook 20 plates of five course meals for the judges, and the eliminated teams, i.e. 100 plates per team. The champion will win a prize of $100k (raised to $250k from Season 3 onwards).

MKR is hosted by Pete Evans and Manu Feildel, who also serve as the series' main judges, and features Guy Grossi, Karen Martini, Liz Egan and Colin Fassnidge as the guest judges.