Refusal of the Call 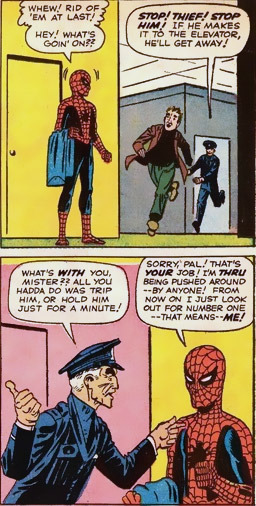 And we all know how this ends.
Lisa: I know it's hard, Gary. But you're still the only hope to stop these newer terrorists.
Gary: Why me?! Why am I the only one?!
Lisa: Because you're the one with the power to—
Gary: WELL, I DON'T WANT THE FUCKING POWER! I don't want the guilt, I don't want the shame, and I don't want the responsibility!
— Team America: World Police
Advertisement:

The character, typically the hero, receives a Call to Adventure but at first refuses for some reason. Events then conspire to force them to accept the call, and in a good number of cases, the events in question hit home in a very tragic fashion.

If this is the second (or further) iteration of a Hero's cycle, it isn't uncommon for the Hero to have ''forgotten'' his adventures, given up his Hero powers, or some combination of the two, deliberately or otherwise: this variant of the refusal is Can't Stay Normal.

The term comes from anthropologist Joseph Campbell's analysis of heroic sagas; it is a standard feature of such stories. (See The Hero's Journey.)

Of course some heroes jump at the chance for adventure. (Others would have if they'd only gotten it!)

Someone who took the latter of a Red Pill, Blue Pill wants to do this to the call in order to go back to their previous lives none the wiser.

See also: Achilles in His Tent, "Leave Your Quest" Test and The Drag-Along. Contrast Adventure Rebuff and Refused by the Call, where the call refuses you, We Are Not Going Through That Again which takes place at the end of a story where the heroes refuse to repeat their adventure when confronted with the possibility, and Can't Refuse the Call Anymore, when circumstances force the hero to accept the call. Not to be confused with Didn't Want an Adventure.

For an entire fantasy genre built on this trope, see Slow Life Fantasy.

Of course, this is followed by:

Artemis: [after Garrett departs] I will tell them this: Nothing has changed. All is as written. Beware the Metal Age.