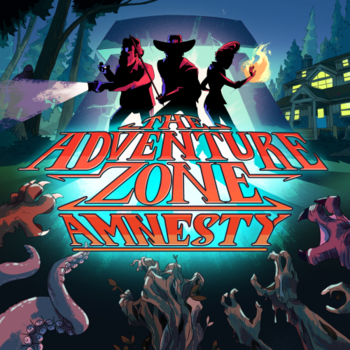 In the fictional Kepler, West Virginia, a town bordering the Monongahela National Forest

and situated within the United States National Radio Quiet Zone

, the economy is in rough shape. It used to depend on tourists coming to ski, but larger resorts have created stiff competition, and its location makes it unlikely that another industry will move in anytime soon. Duck Newton (Justin), a ranger stationed at Monongahela, believes that the town can market itself based on the area's natural beauty. Ned Chicane (Clint), on the other hand, has decided to capitalize on local urban legend and folklore with a cryptid "museum", but the townspeople would have mixed feelings about it even if Ned didn't seem like a two-bit huckster. And then there's Aubrey Little (Travis), a traveling stage magician—the Lady Flame—desperately trying to get her act off the ground. The three of them collide when a strange woman who calls herself Mama reveals to them a magical Gate in the forest and her constant battle to save two worlds: the Earth, menaced by mysterious "Abominations" who pass through the Gate near the full moon, and Sylvain, a planet of supernatural creatures threatened by an encroaching curse. After reluctantly joining Mama's Pine Guard, Duck must come to terms with a magical destiny he would rather ignore, Ned struggles between his capacity for good and his greed, and Aubrey must learn to effectively wield her suddenly very real magic.

Amnesty was originally pitched as an "experimental arc" of The Adventure Zone, to allow the McElroys to experiment with the Monster of the Week system. Amnesty was later confirmed to have been picked up as Season 2, and the first episode of its second arc premiered April 12th, 2018. The season concluded on September 23rd, 2019.