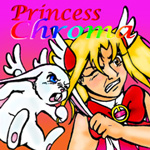 is a Magical Girl webcomic about a world drained of color and the junior high student named June Summer who has to re-color it. With her mentor, a fluffy winged bunny named Spiders, to instruct her, June must transform into the magical Princess Chroma to restore color to the earth.

Unfortunately, the two don’t get along in the slightest and June doesn't care much for having to fight monsters while wearing a cute dress and shouting catchphrases. When it comes to fighting evil, she prefers a hands-on approach while using her magical mentor more as her personal punching bag than her teacher.

, which includes fan art, special projects, side stories, and more.