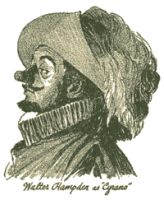 This 1897 play by French author Edmond Rostand is famous enough that its plot has become a trope in its own right!

Hercule-Savinien de Cyrano de Bergerac — the legendary poet, duelist, soldier, philosopher, physicist, musician, playwright, and novelist — has a problem. He has an enormous nose, which he believes makes him so incredibly ugly that he thinks no woman could ever love him, and fears his love for his cousin Roxane will never be reciprocated. Just when he's mustered the courage to hand her the love letter he's written, she announces that she's in love with the beautiful Christian, and asks Cyrano to protect him against danger. Roxane has fallen in love with Christian at first sight and tells Cyrano that if Christian isn't intellectual enough for her, she would be so disappointed that she could die. Cyrano resolves to subdue his love for her and tell Christian about Roxane’s love. Christian despairs, because he also loves Roxane, and even though he is very handsome, he's inarticulate, and believes Roxane would never accept him. So, Cyrano, trying to express his love and to not disappoint Roxane, eagerly offers to script Christian's courtship, beginning by giving him Cyrano's own love letter for Roxane. Naturally, hilarity (and swashbuckling, and eventually tragedy) ensues.

Is there a moral? Well, "don't let vanity hold you back," and "Love at First Sight is ridiculous." The play also introduced the term panache into the English language. Literally it means "plume", feathers worn in hats and helmets, but it has come to signify confidence and flamboyance such as demonstrated by Cyrano in the play. Critics thus consider the play notable for being both a cruel satire and straight celebration of the tropes and themes most associated with the The Cavalier Years.

The two most respected English translations are Brian Hooker's from 1923 and Anthony Burgess' from 1971. Hooker's version is a translation that doesn't change a line of Rostand's original text except for replacing now-archaic references with references an American audience would be more likely to recognize. While Rostand's French script rhymed, Hooker's English script doesn't, except for things that rhymed in-story such as Cyrano's improvised ballad during his duel with Valvert. Burgess' version is more of a "modern adaptation" in which he claimed he tried to recapture some of Rostand's comedy that he felt was lost in Hooker's translation. It also makes some minor plot changes, combining Cyrano's captain and Cyrano's best friend into one character and replacing Roxane's appearance in person in Act IV with a letter from her. Burgess' version, like the French original, rhymes.

a French playwright, duelist, and ghost writer of love letters named Cyrano de Bergerac, and the main characters in the play (Roxane, Christian, Le Bret, De Guiche) also existed. This play is as well researched as a Roman à Clef, because Rostand was an academic that researched France’s literary environment in the 17th century, so all the incidental writers, poets, actors, period pieces, places and battles really existed at that time.

There are two notable film adaptations: one from 1950 in English (using the Hooker translation) which garnered a Best Actor for José Ferrer, and the rapturously-acclaimed 1990 French version directed by Jean-Paul Rappeneau and starring Gérard Depardieu (with the Burgess translation later used for subtitles); the latter is notable for being one of a small percentage of films to achieve a perfect 100% rating on Rotten Tomatoes. In addition, the 1987 movie Roxanne, starring Steve Martin, is a modernized take on the story; while not as acclaimed as the 1990 film, it's also considered highly worth watching. The Disney Channel original movie Let it Shine is also clearly based off of this play, even going as far as to giving the main characters similar names (Cyrano= Cyrus; Christian= Chris; Roxanne= Roxy, whose full name is actually Roxanne). (You can probably skip this one.)

For the various other adaptations of the play, see here.