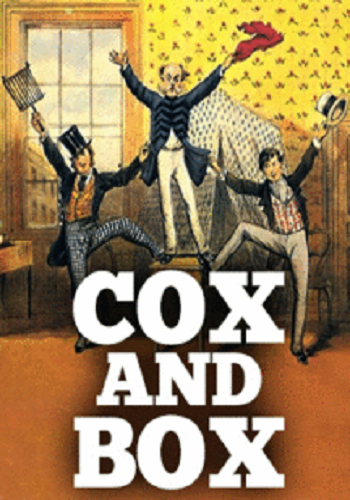 Not quite a Gilbert and Sullivan opera — Gilbert was not involved — this is Sullivan's first major comic opera, working with lyricist F. C. Burnand. It was adapted from John Maddison Morton's play Box and Cox, and is one of Sullivan's most successful collaborations outside of his work with Gilbert, and often performed alongside one of the shorter Gilbert and Sullivan works. Its success had led him to work on more comic operas.
Advertisement:

The plot, such as it is, involves two lower-class men, Cox and Box, one who works nights and one who works days, being rented the same room by their ex-military landlord, Bouncer. When one of them gets a day off, the secret comes out; they discover that both of them are fleeing the affections of a rather over-eager woman, and, after trying to convince the other to take her, the plot is resolved when Bouncer hands over a note revealing that she has married a Mr. Knox, and Cox and Box are "discovered" to be long-lost brothers, due to the complete lack of a mysterious birthmark - just like the missing brother!

However, along the way, we get some of the best and most infectious music from Sullivan's early works, many laughs, clever and witty dialogue, and enough misunderstandings and people just barely missing each other's presence to make a fine hour of theatre.

Usually performed with a few cuts of dialogue and longer verses if not performed on its own. Some of these are a bit poorly chosen in the "standard" cuts, though, and better productions often keep in the first verse of Bouncer's first song, and some of the ending (which ends very suddenly otherwise).

Tropes present in this opera: