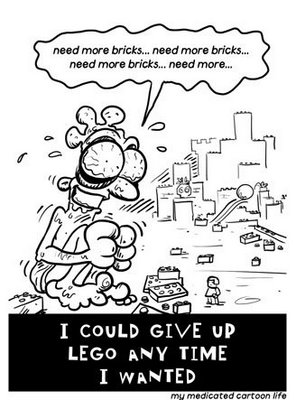 used with permission.
"Stop spending all our cash
On back issues of The Flash."
— Ookla The Mok, "Stop Talking About Comic Books or I'll Kill You"
Advertisement:

Being a geek is hard. But never mind any social stigma, or trying to explain your hobbies to other people. Oh no. The hardest hits in Geekdom go straight to your bank account.

Perhaps because they feel that they don't reach a wide audience, makers of so-called "geek" paraphernalia charge a pretty penny for their wares. It doesn't help that geeks are as into their interests as any Sports fan is into his favorite team, which is to say a lot. Just because their bobbleheads are more likely to be Mobile Suits than football players, doesn't mean they're not like the rest of mankind. Just in different ways.

Can be made worse by the hardcore Fan Boy's preference for overpriced merchandise. This guy wants geek paraphernalia to be overpriced because he wants to be the only one on the block who can afford to own it. If an item costs $9.99, then any old fan, even one who has a mortgage and bills to pay, can afford it; but if it costs $129.99 and comes with the fake totally legitimate signature of the fandom's creator, then only a true fan would spend so much of his mother's money to purchase it. This is a dream come true for the manufacturer, who would much rather sell 10,000 items at a $128 profit margin than 50,000 items at an $8 profit margin.note  In case you're wondering, that comes out to 1,280,000 in profits versus 400,000 in profits.

Additionally, because the in-roads and availability of material related to the hobby seem so tenuous, the Fan Boy will be willing to pay inflated prices to ensure that material keeps being produced. Of course, the rise of the internet has proven there is a breaking point, as many anime licensees have found out: expecting people to pay $40 for a good seventy-five minutes of entertainment that can easily be distributed online may soon put you out of business.

As these hobbies become more mainstream, the prices will often fall. Many fans then find that the situation doesn't get all that much better, as the lowered prices simply encourage them to get more.

Since these hobbies are so expensive, ads for them count as Up Marketing, just at fans of these instead of the upper class.

Obviously, this trope doesn't just apply to "geek" culture. People can be obsessed with collecting just about anythingnote Which is why this page is for in-universe examples only, because it turned into "The thing I like is expensive!" "Me too!" "And mine!", be it guns, sports memorabilia, classic cars or anything in between. The prices for some items can be absurdly high, depending on how rare the item is and how much money collectors are willing to shell out.