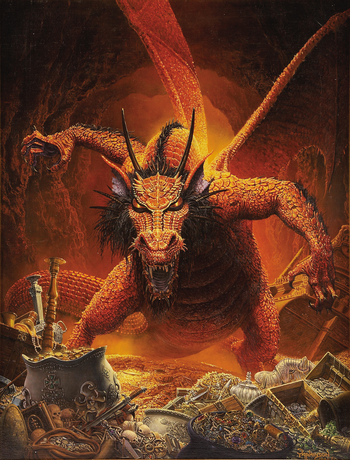 Ivory, rubies and golden swords!
Brave ye the dragon to reach his hoard?
"[The dragon] is driven to hunt out
hoards underground, to guard heathen gold
through age-long vigils, though to little avail."
— Beowulf (v. 2275-77)
Advertisement:

In some settings, dragons tend to guard hoards of treasure — typically by lying on top of it.

This trope is especially ingrained in Germanic Mythology — in fact it is hard to find a dragon in ancient Anglo-Saxon, German or Norse legends that doesn't guard gold. Curiously, there is no consensus as to why dragons do this. Justifications in-story for why a dragon sits on a hoard, including backstories of how hoard and dragon came together, vary considerably.

In some ways, hoard-guarding dragons are no different from other treasure guardians: They make sure it isn't too easy for the hero to get at a desired MacGuffin, and a heap of treasure in itself provides a convincing motivation for a hero to engage in an exciting monster-fight.

Dragons have a peculiarity, though, in that they are especially attached to gold: dragon-hoards almost always contain at least a substantial share of gold. Whatever the reasons, on average dragons show noticeably less interest in other treasures, like silver or even jewels.

People have also long noticed — see that Beowulf quote — that dragons have no apparent use for treasure: they cannot spend, wear or process it. More often than not, they don't do anything beyond brood over or sleep on their treasure. Dragons, it was concluded, must be pathologically avaricious and stingy — kind of like a species of compulsive hoarders with a Money Fetish. In fact, up to the 17th century, dragons were considered the emblematic representation of Greed.

One possible explanation of the origin of this trope comes from the old hypothesis about dragon legends being inspired by dinosaur fossils. Miners who were digging for gold would sometimes find dinosaur bones buried nearby, hence the association between the two. This is also believed to be the reason griffons are also sometimes associated with treasure, as they're supposedly inspired by ceratopsians, being quadrupeds with beaks. The serpentile nature of many dragons also connects them with snakes. Given the fact that many snakes live in caves, and precious minerals are most often found underground, the snake/dragon = gold connection may result from simple gilt by association.

A theory supported by linguistic scholars is that this trope predates Greek and Vedic mythology and has roots going all the way back to Proto-Indo-European mythology where monsters — especially dragons and serpents — would steal and hoard valuable treasure, such as cattle and women, especially high-ranking ones. The money-hoarding dragon would then have been a natural evolution of this concept as money and other valuables became an increasingly important sign of wealth.

Beyond that, individual settings may come up with any number of justifications for this behavior. In many cases dragons may just like owning precious things the same as anybody else, while in other cases the hoard may serve as a very long life's worth of trophies and mementos or as an elaborate mating or power display by symbolizing the dragon's personal success and might. In other instances the dragon may actually have practical use for the stuff — up to and including eating it.

The association of dragons with greed, combined with their preference for gold, makes that dragon hoards coincide with a certain regularity with outbreaks of Gold Fever.

Treasure-hoarding dragons, once common, became increasingly forgotten in the age of Chivalric Romance: For a Knight in Shining Armor, fighting for so mundane a reward as treasure was no longer deemed noble enough. Hence gold-hoarding dragons were largely superseded by the princess-stealing ones, until the trope was revived by Fantasy literature, especially through the influence of The Hobbit.

In more realistic settings where dragons don't exist, large reptiles may sometimes be encountered guarding treasures. Parody versions will involve dragons hoarding something other than treasure.

May involve a Treasure Room. This trope is to Pooled Funds as a waterbed is to a swimming pool (depending on the size and age of the dragon, it may be the other way around). See also Thieving Magpie, for another creature obsessed with hoarding shiny and/or precious things, and Lazy Dragon, for dragons that don't seem to do anything beyond sleep on their hoards.