Literature / The Saga of Yngvar the Traveller 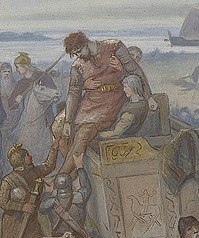 "Tola had this stone raised after Harald, Ingvars brother. The travelled like true men, far away in search of gold, and in the east they fed the eagle. They died on the southern trail in Serkland"
— The "Stone of Gripsholm" raised in memory of Ingvar and his comrades and one of the most famous Runic inscriptions in all of Sweden
Advertisement:

in the 12th century. It concerns the life of an 11th century Swedish Viking named Yngvar Eymundsson, his son and their adventures on the eastern trail.

In Sweden during the reign of Eric The Victorious, there is a Chieftan named Aki. Aki desires to marry one of the daughters of King Eric but unfortunately for him, she is already promised to a district king in Russia. Aki secretly travels to Russia, assassinates him and returns to Sweden to marry King Erics daughter. He has a son with her called Eymund. Eric does not retaliate at first, fearing great loss of life in his lands, but later dispatches Aki in a Nasty Party with the help of Jarl Hakon of Norway. When Eymund grows up he avenges his father by killing the tax-collectors who had come to extract tax from his father's old lands. He is outlawed in all of Sweden by King Olof Skötkonung for his troubles and goes eastwards as a mercenary, fighting for King Jarizleif of Russia against his brother Burizleif. Eymund is later forgiven by King Olof for his crimes and returns to Sweden, inheriting his father's old lands. The focus then shifts from Eymund to his son Yngvar who grows up to be a strong and respected man and a friend of both King Olof and his son Prince Anund. However, when Olof refuses to give Yngvar the title of king, he decides to travel eastward to make a name for himself and experiences many fantastical adventures and battles in the process, including battling against a Dragon, a Giant and Pirates who use flamethrowers and ride ships camoflaged as Islands. When he dies, the focus shifts to his son, Svein Yngvarsson who attempts to continue his legacy.

Although this saga is cosidered to be a Fornaldarsaga

and contains a whole lot of fantastical and supernatural occurences, Ingvar the Far-Travelled

is a 100% real historical person who led an expedition into Georgia (Europe) and the Middle East in the 11th century. About 25-40 Runestones are raised in Sweden in memory of this endeavour, and a few mentions people featured as characters in the saga. The saga covers this journey up to a certain extent.

An English translation of the saga can be found here.

The Saga of Yngvar the Traveller contains examples of the following tropes: