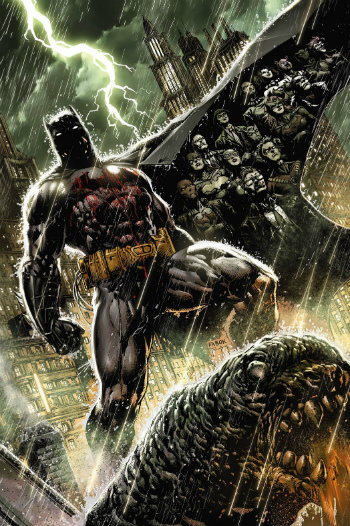 "Your allies have been slaughtered. Your city is burning to the ground. I have taken everything from you, piece by piece. Watch, Bruce... Watch as you lose everything".
Advertisement:

A typical case for the caped crusader goes horribly wrong when a gunshot from Commissioner Gordon hits an electrical transformer and causes a high-fatality, head-on collision between two subway trains. Gordon is quickly blamed for the event and thrown into Blackgate Prison, but a suspicious Batman soon discovers evidence suggesting that not only was the commissioner framed but that his framing was just part of a far, far bigger scheme by a mysterious villain who seems to be determined to utterly destroy Gotham itself. As the mysteries begin piling up and foes old and new start rearing their heads, the various members of Batman Inc. will have to band together in order to stop this deadly conspiracy, but is it already too late and is there anyone left in Gotham for the Batfamily to trust?

Batman Eternal is a weekly comic-book series running from 2014 to 2015 in the New 52, focusing on the eponymous Caped Crusader, his supporting cast and his Rogues Gallery. Released to coincide with the 75th anniversary of Batman, the series plot was developed by popular writer Scott Snyder one of his proteges, James Tynion IV, with a cadre of other creators conrtibuting to individual issues Tynion IV, Ray Fawkes, Kyle Higgins, John Layman and Tim Seeley. Not to mention a veritable army of pencillers, inkers, colorists and letterers added to the fray.

The storyline was also the unique feature of a Flash Forward in Batman #28, which teased the return of Ensemble Dark Horse Stephanie Brown.

A Sequel Series, Batman and Robin Eternal, was announced at SDCC 2015 which will see the return of fellow Ensemble Dark Horse Cassandra Cain.