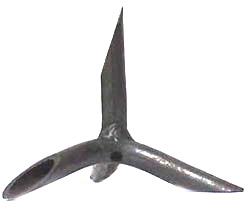 Watch your step.
"Caltrops? What are you, a ninja? Coming up with such an unpleasant countermeasure..."
— Shoto Todoroki (to Aizawa), My Hero Academia
Advertisement:

Caltrops are tetrahedral items used for making ground hard to cover. They always land with a pointy bit sticking up. Handy for preventing pursuers from catching you, whether they are on foot, on horseback, or, in more modern cases, in a vehicle.

See also Spikes of Doom and Spiked Wheels. Expect Agony of the Feet. Land Mine Goes "Click!" is for the modern explosive equivalent.

Mythbusters tested their effectiveness in a police chase scenario and while they do work, what tends to happen is non-hollow caltrops plug the hole they create in the tire, meaning their effective power tends to take a few minutes to kick in.