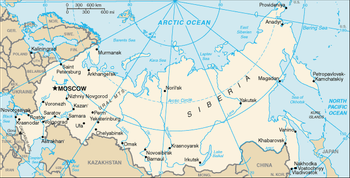 It's very big.
Russia! what a marvelous phenomenon on the world scene! Russia - a distance of ten thousand versts *note a verst is a traditional Russian unit of distance roughly equivalent to a kilometer; because of that, in modern usage a verst is a kilometer, or a more archaic synonym thereof in length on a straight line from the virtually central European river, across all of Asia and the Eastern Ocean, down to the remote American lands! A distance of five thousand versts in width from Persia, one of the southern Asiatic states,note Russia no longer borders Persia/Iran today. Also, while Iran is to the south of Russia, it is nowhere near the southern half of Asia. to the end of the inhabited world - to the North Pole. What state can equal it? Its half? How many states can match its twentieth, its fiftieth part?… Russia - a state which contains all types of soil, from the warmest to the coldest, from the burning environs of Erivannote now belonging to Armenia to icy Laplandnote now belonging to Finland; which abounds in all the products required for the needs, comforts, and pleasures of life, in accordance with its present state of development - a whole world, self-sufficient, independent, absolute.
—Mikhail Pogodin (1800-1875)
Advertisement:

Russia (Russian: Россия, Rossiya), also known as the Russian Federation (Russian: Российская Федерация, Rossiyskaya Federatsiya), is an Eastern European and North Asian country spreading all the way from Norway and Poland to Japan and the US state of Alaska. It is a federal semi-presidential republic, comprising 83 federal subjects and two territories disputed with Ukraine. From northwest to southeast, Russia shares land borders with Norway, Finland, Estonia, Latvia, Lithuania, Poland (both with Kaliningrad Oblast), Belarus, Ukraine, Georgia (Europe), Azerbaijan, Kazakhstan, China, Mongolia, and North Korea. It shares maritime borders with Japan by the Sea of Okhotsk and the U.S. state of Alaska across the Bering Strait. At 17,075,400 square kilometres (6,592,800 sq mi), Russia is the largest country in the world, covering more than one-eighth of the Earth's inhabited land area. Russia is also the world's ninth most populous nation with over 146 million people as of 2020. Extending across the entirety of North Asia and much of Eastern Europe, Russia spans eleven time zones and incorporates a wide range of environments and landforms.

The nation's history began with that of the East Slavs, who emerged as a recognizable group in Europe between the 3rd and 8th centuries AD. Founded and ruled by a Varangian warrior elite and their descendants, the medieval state of Rus arose in the 9th century. In 988 it adopted Orthodox Christianity from the Byzantine Empire, beginning the synthesis of Byzantine and Slavic cultures that defined Russian culture for the next millennium. Rus' ultimately disintegrated into a number of smaller states; most of the Rus' lands were overrun by the Mongol invasion and became tributaries of the nomadic Golden Horde. The Grand Duchy of Moscow gradually reunified the surrounding Russian principalities, achieved independence from the Golden Horde, and came to dominate the cultural and political legacy of Kievan Rus'. By the 18th century, the nation had greatly expanded through conquest, annexation, and exploration to become the Russian Empire, which was the third largest empire in history, stretching from Poland in Europe to Alaska in North America.

Following the Russian Revolution and Red victory in the 1917-23 Civil War, the Russian Soviet Federative Socialist Republic became the largest and leading constituent of the Soviet Union, the world's first constitutionally socialist state and a recognized superpower, which played a decisive role in the Allied victory in World War II. The Soviet era saw some of the most significant technological achievements of the 20th century, including the world's first spacecraft, and the first astronaut. The Russian Federation became the successor state of the Russian SFSR following the dissolution of the Soviet Union in 1991, and is recognized as the continuing legal personality of the Union state.

The Russian economy ranks as the eighth largest by nominal GDP and sixth largest by purchasing power parity. Russia's extensive mineral and energy resources, the largest reserves in the world, have made it one of the largest producers of oil and natural gas globally. The country is one of the five recognized nuclear weapons states and possesses the largest stockpile of weapons of mass destruction. Russia is a great power and a permanent member of the United Nations Security Council, a member of the G8 (currently suspended), G20, BRICS, the Asia-Pacific Economic Cooperation, the Shanghai Cooperation Organisation, the Eurasian Economic Union, the Organisation for Security and Cooperation in Europe (OSCE), the World Trade Organisation (WTO), and the leading member of the Commonwealth of Independent States.

There are two words in Russian that mean "Russians:"

These two designations obviously don't overlap 100%. When it becomes necessary to distinguish between the two, the Russian words will be used.

While we are discussing the ethnic question, the racial one has to be mentioned as well. Are Russians Caucasian or Asian? A large part of Rossiyane are Asian, especially the so called "Minor Nations" (malye narody) of Siberia. Russkie are Caucasian. Western Russia is settled by ethnic Russians and various Finnic and Caucasoid minorities who are also Caucasian, and most Asian-descended minorities of European Russia such as the Tatars and the Bashkirs also look pretty white. In Siberia, the white ethnic Russians are a majority, and the Minor Nations an overall minority (though there are many regions in Siberia where the native Siberians such as the Yakut people are a majority). Afro-Russians exist but they are a tiny minority, mostly descendants of naturalized Africans from former Soviet client states.

There is little to no tension between white Russians and Asian native Siberians. The touchy racial issues in Russia involve people from the North Caucasus and immigrants from Central Asia.

Aside from them, Russia administers two more territories which aren't federal subjects: the town of Barentsburg on Svalbard, Norway and the town and space launch facility of Baikonur, Kazakhstan. The proposed new Constitution of 2020 has a special definition for territories without federal subject status: "federal territories" (федеральные территории) are to be governed directly by the Kremlin, without devolved powers. Presumably, once the new constitution will be in effect, new federal territories will be created, including closed cities, natural preserves, offshore zones and Arctic islands.

The precise territory defined as Siberia varies depending on who you ask. Western sources usually call the entirety of Asian Russia Siberia. In geography, Siberia is the part of Asian Russia east of the Ural Mountains and west of the watershed between Arctic and Pacific basins, and the Pacific basin is called the Russian Far East (Dalniy Vostok). The Urals and the Russian Far East aren't Siberia. The geographical Siberia is subdivided into Western Siberia (the lowland swampy region in the Ob-Irtysh basin and the highlands around the sources of the Ob, including the Altai Mountains), Eastern Siberia (the highland area between the rivers Yenisei and Lena, including Lake Baikal and the Transbaikal) and Northeast Siberia (the mountainous, bitterly cold region between the Lena and the Pacific watershed).

In administrative terms, only the Siberian Federal District is called Siberia. However, the inhabitants of Surgut or Khanty-Mansiysk are emphatic in that their region is not the Urals, and most Transbaikalians and Yakuts agree that they live in Siberia. The question of whether Northeast Siberia is Siberia is more complicated, because the economic capital of the region, Magadan, is located on the Pacific coast and therefore unarguably in the Russian Far East, and there are no cities or large towns in Northeast Siberia proper.

Other
The Russian flag 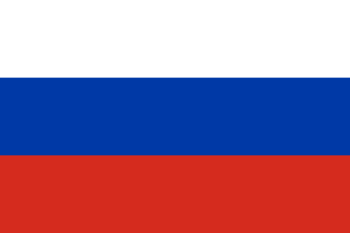 After the fall of the USSR, Russia reused the colors of Tsarist Russia, which had no specific meanings. Tradition says that Tsar Peter the Great, a great admirer of the Dutch Republic, took the Dutch flag for inspiration and simply reordered the colors to create the Russian tricolor.
Coat of arms of Russia 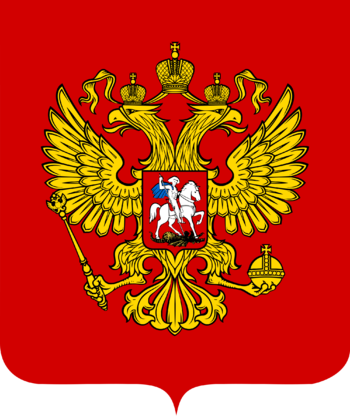